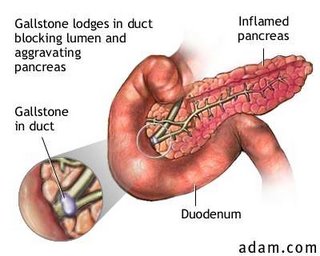 So, I had pancreatitis (which means inflammation of the pancreas). Yes, it was serious, but in no way was I near my death at all. I was in a lot of pain and it could have been a lot more serious than it was - but it wasn't. And you know what the treatment is for pancreatitis? Wait it out. Just wait until it's finished being all agonising and painful, and then the doctors can do something. So I was doped out on morphine for those first few days, but really, it wasn't helping that much. Just gave me some strange, strange dreams. Being in hospital can be incredibly humiliating and degrading. I had gone from having a nice weekend visiting the garden centre, playing with my son, to being hooked up to an IV drip, with a catheter, waiting desperately for someone to give me my next morphine injection. But it could have been worse. Apparently, pancreatitis is brought on by two different things, gall stones or alcoholism. If it had been alcoholism, things could have been so much worse and my story might have ended differently.. the pain and the risk would have been far greater. For me, they had to wait until the inflammation was less so that they could operate and remove my gall bladder, which they did successfully. 10 days in hospital, but at least I won't have to go through it all again (no gall bladder means no gall stones which means no more pancreatitis). I didn't have to worry that my son wasn't being cared for (he had his daddy and his grandma, bless them both) though I did miss him terribly. But he's OK. And so am I.
Written by Michelle Fluttering Butterflies at 09:47