The Book of Illusions by Paul Auster 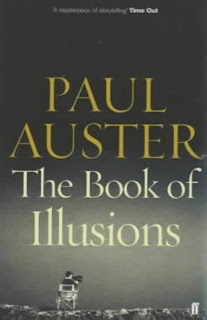 Vermont professor David Zimmer is a broken man. The protagonist of Paul Auster's 10th novel, The Book of Illusions, hits a period in which life seemed to be working aggressively against him. After his wife and sons are killed in an airplane crash, Zimmer becomes an alcoholic recluse, fond of emptying his bottle of sleeping pills into his palm, contemplating his next move. But one night, while watching a television documentary, Zimmer's attention is caught by the silent-film comedian Hector Mann, who had disappeared without a trace in 1929 and who was considered long-dead. Soon, Zimmer begins work on a book about Mann's newly discovered films (copies of which had been sent, anonymously, to film archives around the world). The spirit of Hector Mann keeps David Zimmer alive for a year. When a letter arrives from someone claiming to be Hector Mann's wife, announcing that Mann had read Zimmer's book and would like to meet him, it is as if fate has tossed Zimmer from one hand to the other: from grief and loss to desire and confusion.

Although film images are technically "illusions," this deft and layered novel is not so much about conscious illusion or trickery as about the traces we leave behind us: words, images, memories. Children are one obvious trace, but in this book, they are not allowed to carry their parents forward. They die early: Hector Mann losing his 3-year-old son to a bee sting just as David Zimmer has lost his two sons in the crash. The second half of The Book of Illusions is given over to a love affair, and to Zimmer's attempt to save something of Hector Mann, and of the others he has loved. In the end, what really survives of us on earth--what flickering immortality we are permitted--is left to the reader to surmise.

I had to read this book slowly, to drag it out over a week. I didn't want this story to end. It invaded my thoughts so much so that it was the first thing I thought of when I woke up and the last thing I thought about when I went to sleep. Auster's writing style, his characters, the bizarre series of events and all the details. The details are what have made The Book of Illusions one of the best books I've read in a very long time. I've read three of Auster's books in as many weeks and each one gets better and better in my mind.

Written by Michelle Fluttering Butterflies at 12:53