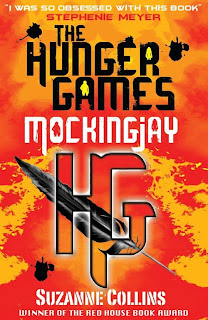 Oh dear god, more Mockingjay! I'm sorry! I don't feel entirely comfortable adding my little (spoiler-free) review to the thousands of other reviews out there, but oh well, right?

Everyone's been hotly anticipating this final installment of the Hunger Games series by Suzanne Collins, including me. I had N go out and buy it for me on the release day, as he works close to a large bookstore and I do not. I had to wait until he got home and it just happened to be the night I promised myself I'd go for a run and then work on an assignment for my university course! Such bad timing. No matter, I still finished Mockingjay pretty quickly and am still slightly reeling after closing that final page.

You know, when I first picked the book up, my initial (entirely superficial) thought was how excited I was to finally learn who Katniss chooses - will it be Peeta or Gale?!

And then I began, and Mockingjay jumps in right after the explosive ending to Catching Fire and Katniss is struggling with the aftermath of the events that occurred. And the whole thing is sort of hammered home for me that this isn't a light-hearted romance novel. While this series does have a focus on the Peeta-Katniss-Gale, it's also a political dystopic novel. And that these characters are living in it and suffering and it didn't seem to matter so much about who ended up with whom. (OK, it does still matter, I just had a bigger perspective to work with)

This novel especially, as they are in the midst of a rebellion against the Capitol, highlights the complete lack of regard for human life and human rights that we witnessed by the government's participation and organisation of the chilling Hunger Games in the first two novels in the series. And it continues with Mockingjay, as the two opposing forces pit against each other. Terrible thing happen and are witnessed over the course of this book and I did cry quite a lot. I won't go into it too much, but as it is a war, expect casualties. There are some horrific events and plenty die. Where does one draw the line? What's too much? Is all fair in war?

What I love about the series so much, apart from the action and political drama, is Katniss. She's a strong, kick-ass heroine. She can take care of herself and her family. And in especially when comparing her to other YA main characters, it is always wonderful to see her make her romantic relationship choices slowly and wisely. It takes her nearly all three books in the series in order to choose between Peeta and Gale, whereas I have noticed a large trend of relationships in other YA novels where the love is instant and all-consuming.

There's a lot of harrowing scenes, a lot of downcast characters, lots of action and explosions, fab characters old and new and yes, a choice is made.

So, aside from the epilogue, a thoroughly enjoyable end to a fantastic series. One that lived to my anticipation and expectations!

This has been read as part of Presenting Lenore's Dystopian August! Highly recommended.
Written by Michelle Fluttering Butterflies at 09:08