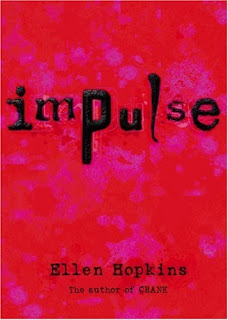 Sometimes you don't wake up. But if you happen to, you know things will never be the same.

Three lives, three different paths to the same destination: Aspen Springs, a psychiatric hospital for those who have attempted the ultimate act -- suicide.

Vanessa is beautiful and smart, but her secrets keep her answering the call of the blade.

Tony, after suffering a painful childhood, can only find peace through pills.

And Conner, outwardly, has the perfect life. But dig a little deeper and find a boy who is in constant battle with his parents, his life, himself.

In one instant each of these young people decided enough was enough. They grabbed the blade, the bottle, the gun -- and tried to end it all. Now they have a second chance, and just maybe, with each other's help, they can find their way to a better life -- but only if they're strong and can fight the demons that brought them here in the first place.

Ellen Hopkins is one of those authors who I hear nothing but good things. But Impulse really intimidated me before I picked it up. I really love verse novels, but a 600+ verse novel? With three different perspectives? About teen suicide? I'll be honest and say that Impulse stayed on my shelf for many a month before I decided to give it a chance. And now that I've read it, I don't know what I was worrying about. The three voices are strong and different enough to be identifiable from each other and their stories made my heart break and I sympathised with each of the characters.

Impulse is the story of three teenagers who have attempted suicide and live. They are sent to a psychiatric hospital, where they struggle through recovery, forming a bond between the three of them. They each deal with their own reasons for being there, with different levels of therapy and the system. They are constantly monitored and medicated. They come to rely on and depend on each other as their stories slowly unravel and secrets are revealed...

I find each of the three main characters to be utterly relateable. They're very flawed obviously, but you can see the vulnerability of each of them, as they all want a stable environment to live in and to have stable healthy relationships with other people as well with those who care for them. They have such horrific life experiences and truly awful relationships with parental figures, that I constantly wondered, 'if I was put in their shoes, would I have ended up any differently?'

Conner struggles with the neverending pressure of being perfect. Getting the best grades, getting into the best universities, making the varsity football team, looking the part. All to please his superficial parents who can never find Conner 'good enough'.

Tony has been through the juvenile delinquent centre after committing a terrible crime, and was homeless when he swallowed the pills. His mother never quite around to help him as he suffered abuse after abuse.

And Vanessa's story hit home the most for me. Her need to self-harm, especially as it coincided with hidden mental health issues felt all too familiar. Her father away in Afghanistan, her mother teetering on the edge of something very serious. And to make it through, Vanessa turns to the blade, only that last cut went a little too deep...

It's been really difficult writing this review without using the word 'powerful' but it definitely applies to Impulse. It feels gritty and real and doesn't shy away from really awful topics. Suicide. Sexual abuse. Self harm. Depression. Aspen Springs is no picnic and a lot of really strong emotions and issues are dredged up.

It's not for the faint of heart, but Impulse is a verse novel worth reading.
Written by Michelle Fluttering Butterflies at 09:25