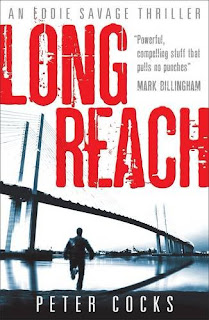 Seventeen-year-old Eddie Savage is shocked to learn that the body of his brother, Steve, has just been washed up in the Thames. But he soon discovers something even more disturbing: that Steve had actually been working undercover for the police – and was probably murdered in the line of duty. Determined to avenge his brother's death, Eddie relinquishes his old life and identity to take up where Steve left off, throwing himself headlong into his first mission – to infiltrate a tough south London gang. But as he becomes caught up in the world of crime, Eddie begins to question where his loyalties lie. Then he makes a terrible discovery...

I was absolutely thrilled when the email from Walker came through about this book. The product description actually made me really excited to read it. I wouldn't say that it's the normal type of book that I read (though perhaps it should be!), but this book is incredible. Very past-paced and gritty and believeable.

There's something about this book that made me unable to put it down once I'd started. I really loved Eddie as a character. The news of his brother's death and what Steve had really been up to left a big mark on Eddie. It's never nice being told your older brother has committed suicide, or that he lived an entire life in secret. Still, Eddie decides to follow in his brother's footsteps, go undercover and work with this government agency. At first, his assignment is as simple as getting close to another student at school, the daughter of a crime lord, and then things progress further and further and Eddie realises that his assignment is so much more complicated and dangerous. Possibly even deadly.

Eddie is only 17 and already he's been thrown into something possibly more than he can handle. I love watching him struggle to adjust to this new life and to his new identity. He's living on his own, with more money than he's used to, with iPhones and laptops thrown at him. He's told to become friends with this hot girl at school. It really sounds like he's landed into something good. But things don't stay easy for long. There was a rather painful and arduous training session before things got started. His handler, Ian doesn't approve of Eddie being in the field. When communications between Eddie and his old family friend, Tony and with Ian slow down to an almost complete stop, Eddie is mostly isolated.

Eddie begins to wonder if Tommy Kelly, the leader of this crime organisation in London is really such a bad guy after all. He seems to take care of his family, cooks, has an interest in art. Would it really be so bad, working with him? I love Eddie's confusion, but it is very understandable, especially as he's told so little from Ian and Tony. Eddie's been manipulated into going really deep undercover with no previous experience. The stakes are high, and Eddie's life seems to hang in the balance.

Honestly, Long Reach is really gripping stuff. It's really interesting seeing this experienced through Eddie's eyes. He's got a very authentic teenage voice. During training before going undercover and also during a long few weeks training for an important boxing match, it's really shown how hard-as-nails and tough Eddie really is. He's got a great sense of humour and a huge curiousity to know what exactly happened to Steve and how and why he ended up like he did. But things are bound to go wrong, they have to, especially with Eddie being so new to all. My heart kept jumping into my throat at Eddie's near-misses with catastrophe. I cared for Eddie and his well-being right from the start. As well as Eddie's perspective, we're also shown snippets from the point of view of Donnie, a hired thug of Tommy Kelly's, which reinforces for the reader that Tommy Kelly and his gang are really up to no good and that Eddie is constantly in danger.

Long Reach really is a perfect fast-paced, gripping thriller for the YA audience. It has me incredibly excited to read more in the series. A huge thank you to the lovely folk at Walker for sending this book for me to review.
Written by Michelle Fluttering Butterflies at 08:44