I love fairy tale movies. I love being swept away into a fantasy setting with magical creatures, with romance and adventure and that fairy tale ending.

I think fairy tales and fairy tale retellings are having a bit of a surge in popularity possibly, with the recent release of the films Beastly and Red Riding Hood. Beastly, of course being the film adaptation of the book by Alex Flinn and is a retelling of Beauty and the Beast. And Red Riding Hood has a film novelisation already published, written by Sarah Blakely-Cartwright. I have not seen either film, so cannot make any comment. (Though if you've seen either film, do let me know in comments!)

I can, however, share with you some of my favourite films with fairy tale elements. Let's begin. 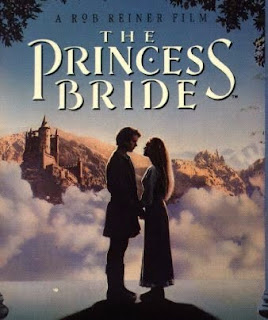 I think my favourite of all time has to be The Princess Bride. I love everything about both the book, by William Goldman, and the film which was released in 1987. It's an unbelievably quotable movie and I find myself thinking of The Princess Bride quotes all the time in my every day life.

There's so many wonderful aspects of the film version. I remember being quite excited when I learnt that Andre the Giant was in it, as he was a favourite wrestler of my brother's. Despite being very young when I first saw the film (it was released when I was 5), I remember having an all-consuming crush on Cary Elwes, who plays Westley.

The romance between Buttercup and Westley is really wonderful. Especially the scene where Westley returns as the Dread Pirate Roberts, expecting to be reunited with his True Love and instead finds Buttercup to be engaged to another. They argue and Buttercup pushes Westley down the hill, and oh... You must watch it if you haven't already. But don't worry, it is isn't just a kissing film.

There's swordfights and magic and a duel of wits. There's a Cliff of Insanity and some of the most memorable characters and dialogue that you'll remember forever. I can't even recommend it enough. 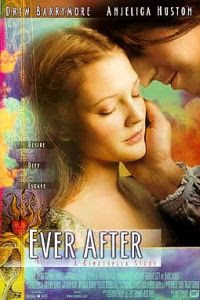 Another favourite? Ever After, starring Drew Barrymore in this retelling of Cinderella. This film came out while I was still in high school and it really became a favourite amongst my circle of friends. It's a retelling of the fairy tale, Cinderella set in Renaissance France.

There are no fairies or talking mice in Ever After, but the magic of this film comes from Drew Barrymore's character taking on a more feminist role. She doesn't need any prince to save her, and she's quite the feisty young woman. 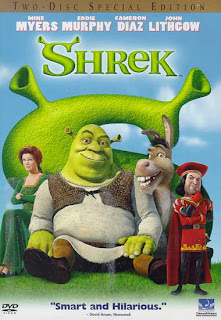 I recently watched Shrek with my boys, who absolutely loved this movie. The bit where Princess Fiona surprised us all by kicking ass when Robin Hood and his Merry Men attacked? My boys died laughing. They thought it was great fun, and so did I.

I think what I loved most about Shrek is the concept of beauty and image. Shrek is very obviously not the usual hero of a fairy tale. He's an ogre. He's big and green and not very pleasant. And though Princess Fiona appears to be a docile princess waiting for her true love's first kiss, she's hiding some secrets of her own. Her fight with the Merry Men, her curse when the sun sets. It's also quite a funny movie and kept me entertained! 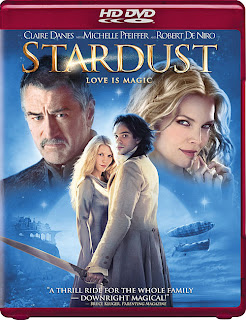 I actually saw the film version of Stardust before I read the book by Neil Gaiman. It's quite good and it grabbed my interest enough that I really had to go out immediately and read the book. I preferred the subtle and less dramatic ending of the book however.

Still, the journey of Tristran into the hero of this story was a wonderful transformation as was the sweetness of the love story between him and Yvaine. Again, there's swordfighting and a ship that flies through air. There's a fallen star in the shape of Claire Danes and this really wonderful fantasy world. Highly entertaining. 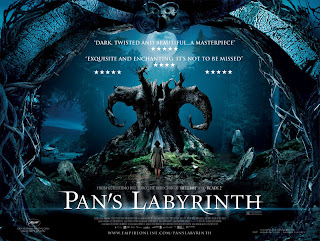 And finally, Pan's Labyrinth is something different altogether. It's a lot darker in tone and content than the others that I've picked, but I definitely didn't want to only choose light, fluffy films. There's nothing light or fluffy about Pan's Labyrinth! It's set in fascist Spain and takes place in 1944. A young girl and her mother go to live with her new step-father, an army general who is incredibly brutal. She meets a mythical creature who lets her know how she can help her mother who is suffering through a difficult pregnancy. The girl must undergo three tasks in order to prove herself as the queen of a fairy tale world. It's quite grim in parts, but I really loved it.

It's only recently that I understood that the Disney film adaptations are very different in tone and content to the original fairy tales. Still, I love them for their simplicity and the romantic nature of them and perhaps it's enough that if someone fell in love with a particular story that they might investigate further?

You know, I can't even discuss the following Disney films in an intellectual way. I know that I should mention something about the passive roles these young girls are put into or roll my eyes at the focus on women getting married, but I just can't do it. I think of Beauty and the Beast, and I think of the ball room dance. When I think of The Little Mermaid, I think of Ariel singing her heart out. So I'm just going to add a few YouTube clips here instead.


Once Upon a Dream from Sleeping Beauty (I'm not entirely familiar with this film actually!)

Tale as Old as Time from The Beauty and the Beast

Part of Your World from The Little Mermaid

Someday My Prince Will Come from Snow White and Seven Dwarves

Also, a film that I really wanted to see but didn't get a chance to watch at the cinema ... Tangled.

So, tell me: what is YOUR favourite fairy tale movie?
Written by Michelle Fluttering Butterflies at 13:36