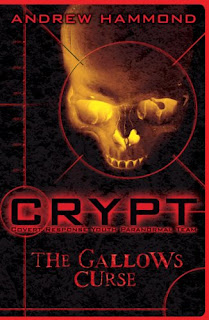 Guest review by Kulsuma at Sunshine and Stardust

CRYPT: The Gallow’s Curse by Andrew Hammond was an exciting paranormal novel. It was full of action, horror and mystery. The main character, Jud Lester, is the star member of the organisation the Covert Response Youth Paranormal Team. CRYPT investigates incidents where the police cannot find answers because the paranormal is at work.

When a series of shocking attacks across London leaves victims dead or injured, the CRYPT must find out who the ghosts are, why they have returned and how to stop them before it’s too late, all whilst avoiding the media spotlight. This is because CRYPT is a secret organisation and if the general public were to know that it investigated instances of the paranormal, they would be both terrified and in uproar.

The idea behind CRYPT: The Gallow’s Curse was very interesting as I loved the idea of teenage ghost- busters solving crime that adults couldn’t due to their lack of Extra-Sensory Perception. I was happy with the scientific explanation given for how ghosts can appear as it wasn’t farfetched.

The chapters were short and fast paced and the constant shift between various characters allowed me to visualise the story in stark detail as well as understand the vast multitude of people affected by the ghosts. The filmic quality of CRYPT is one of the highlights of the book. The vivid and grotesque descriptions interspersed throughout have stayed with me as they had me flinching in terror and disgust.

Jud was an interesting character with a lot of potential that was not fully realised. He was a conflicted character with a sad history; his mother had been killed by a ghost and he’d been convicted of the crime and now must live with a new, secret identity. This secret weighs him down throughout the book. I was not as emotionally invested in Jud as I had hoped to be. I did not feel a strong connection to him.

Bex De Verre, his partner, was feisty, smart and sarcastic. Together they try to find out who the ghosts are and why they are wreaking death and destruction across London. This was simple for me as I only had to read the title to know who the culprits were.

There was some repetition in the first half of the book which slowed the pace of the novel; however this was resolved as the book continued. I liked the surprising twists and turns and the build up of tension that lead to the dramatic climax.

On the whole, I enjoyed reading CRYPT: The Gallow’s Curse and would recommend it to fans of the paranormal, horror and action genres. I look forward to reading the sequel, CRYPT: The Traitor’s Revenge which comes out in March 2012.

Guest review by Kulsuma, thank you!
Written by Michelle Fluttering Butterflies at 09:36