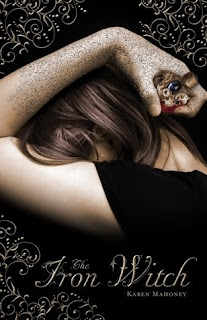 It's no big secret that I'm not a big fan of faerie fiction. I've tried and often failed to enjoy popular books and authors who write successful faerie YA so it was with some trepidation that I started The Iron Witch by Karen Mahoney.

And I was surprised. There's a lot in The Iron Witch that makes it such a promsing start to a new series. I found the mixture of magic and alchemy and faeries to be quite interesting as well as the sweet relationship between Donna and her best friend, Navin.

When Donna Underwood was seven, her family were attacked by faeries. They killed Donna's father and left her mother mad. Donna herself needed to be healed with magic, leaving her arms permanently branded with swirling iron-laced tattoos. Her strange tattooed arms has meant that's she always been a social-outcast with her only friend being the adorable and loyal Navin Sharma.

Though it pains her to lie to Navin, Donna feels that she really must protect Navin from the dangers of knowing about the fey as well as her family's involvement in alchemy. But this knowledge isn't to be kept secret for long as Donna and Navin stumble across some unusual things that build up to something incredibly dangerous. With only the help of the strange boy she meets at a party, Xan, Donna must face the fey again and barter the most sacred knowledge of the alchemists in order to save those she cares about.

It can be quite exciting, The Iron Witch, and once I started I read the book in almost a single sitting. It's very readable, and while I was a bit apprehensive about learning about something as heavy-sounding as alchemy, I found the information regarding it flowed quite nicely. My only complaint about the book is that I wish there had been more time to explore the major relationships in The Iron Witch - that of Donna and Navin as well as Donna and Xan.

It is obvious to the reader how much Navin cares for Donna, much more than that of just a best friend, so I'm really hoping that more time is spent delving into their friendship more. And while Xan was suitably good-looking and mysterious and him and Donna obviously have this connection together, I really wanted to see the two interact more. I felt like the things that he did during the book were a bit of a stretch after knowing Donna for such a short period of time. But these small niggles didn't stop me from enjoying the book at all and I look forward to the sequel!
Written by Michelle Fluttering Butterflies at 08:39