When I was younger, I wanted a tattoo. I had half an idea for it (mostly just that I wanted one), and I had a place on my body I had planned to permanently mark myself. But I didn't go through with it. I majorly chickened out.

One of my reasons against it is that I had nobody to go with. Who wants to do a scary, painful thing alone? The second reason? The pain. My threshold for pain is quite small. The third reason? The most important reason of all... I've never made up my mind FOR SURE as to what sort of tattoo I wanted.

Ages ago, I was on the Facebook page of a friend from high school.  She had just posted photos of a new tattoo.  I clicked on the album out of curiosity and found myself looking at her tat on her foot of a lyric from a Britney Spears song.  I blinked and it was still there.  Huh, I thought.  That's ... different.  And then I read the comment that one of her friends had written in response to her photo.  I can't quite recall, but he said something along the lines of tattoos being permanent reminders of a temporary feeling.  For some reason, that one comment made me think long and hard about what sort of tattoo I'd be considering.  Its importance to me, its reason for being.  I wanted a tattoo to mean something.

During the crippling indecision that followed, I'd pretty much given up on that idea of ever having a tattoo.  Until I picked up the following book...

Somehow, I managed to love Lola even more.  And it was really Lola that I loved so much as opposed to either of her love interests.  I thought Cricket to be utterly cute and sweet and geeky-adorable but at the start of the book, I also loved Max, Lola's older rock star boyfriend.  Mostly because of the awesomeness of his tattoo.  I'm pretty sure that I'd fall in love with ANYBODY who has a literary tattoo - especially if that tattoo is from Where the Wild Things Are by Maurice Sendak.  Seriously. 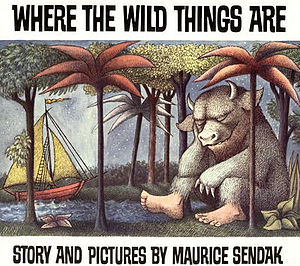 So, naturally, the idea of tattoos have been on my mind again.  And I'm after an awesome literary tattoo.  Something children/YA book related.

What would you do?
Written by Michelle Fluttering Butterflies at 17:35