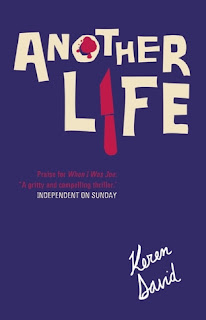 Recently, I read Another Life by Keren David.  It's the third book in a series about a boy, Ty, who witnesses a crime and is placed into witness protection.  Throughout the series Ty really struggles to come to terms with what happens and his own involvement in it.  In this third book, Ty begins to fantasise about starting over.  He wants a clean slate.  He feels as if he removes himself from the lives of his friends and family that they might be safe.

This really struck a chord in me as recently, a friend of mine told me something similar.  This friend of mine is going through something rough and while he has plenty of supportive friends and family and is well loved by many, he still feels alone in what he is going through. And  because of the issues he is dealing with he told me that the best thing he could think of to do is to disappear somewhere unknown.

As my friend was telling me these things, there was such a look of freedom on his face.  There was hope and the feeling of being unburdened.  I can't say that I've felt like that in a very long time, but I've definitely felt that.  Moving to England was the hope that I was looking forward to.  I can't imagine myself starting over in that same way again ... so for me, if for whatever reason I needed a do-over, a new start would mean going back to MY start.  Moving back to America.  I think it would be very scary and hard to imagine, so it would only ever happen in a worst case scenario.  I'm just not brave enough for another huge move in my life.

But what would you do?  In a desperate situation, where would you go or do in order to start over?
Written by Michelle Fluttering Butterflies at 08:27