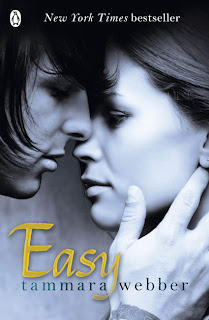 Easy by Tammara Webber really surprised me! I'd heard really good things about it from other book bloggers that I trust, so I shouldn't have been that surprised. But I was.  Mostly because this book is always referred to as 'New Adult' and to me, most of the 'new adult' books I've read haven't been great.

I like the idea of a New Adult category of books, with slightly older characters and a possible university setting, but I don't like the inclusion of needless sex to incorporate the 50 Shades popularity bandwagon which I've found that a lot of NA books include.  And I didn't know where Easy stood in relation to those other books.

And I'm quite happy to say that Easy is a great book, whatever the label or category that it is placed under.  I began reading it one afternoon thinking that perhaps I would read a few chapters to get the feel of the book and all of a sudden I found myself at 2am desperate to turn those last pages and see if there'd be the happy ending that I wanted for these characters.

The story revolves around Jacqueline, a university student who goes to a party after the horrible break-up of her long-term relationship with her boyfriend.  As she is leaving the party, she is assaulted by a friend of her ex-boyfriend and is very nearly raped except that a handsome stranger intervenes.  I love that most of the story is about how Jacqueline begins to come to terms with what has happened to her but also her attempt at moving on and moving forward following the break-up of a long-standing romantic relationship.

Easy is an incredibly addictive book to read, I really just could not put it down.  It has wonderful characters and it covers the topic of rape and attempted rape in a sensitive way.  My only misgivings about this book is the amount of rape included.  I can't tell if the the secondary characters who have experiences of this traumatic crime actually take something away from the story or not. I'm not quite sure if the emotional impact is lessened when we hear so much of this crime occurring? While I really felt for Jacqueline and the things she goes through, I found myself being slightly desensitised to the stories of rape that occurs to the others.  If that makes sense? I still really enjoyed the story and especially the message that Jacqueline and the reader learn to accept, that the fault is not the victim's.

I really liked Lucas's character.  He's very swoonworthy, and I love the tension and attraction between the two.  I could see how Jacqueline would feel less inclined to trust him though and it felt believeable.  It was interesting to see that Jacqueline initially doesn't confide in her roommate and best friend following her attack, but I do love the way in which Jacqueline's friends rally around her when they do know and how much her roommate tries to empower Jacqueline to feel more in control by going to a self-defense class.

I'm really glad that I was able to read Easy and that I didn't let my preconcieved notions of what 'new adult' is put me off.  I will certainly be looking out to read other books in the future by Tammara Webber!
Written by Michelle Fluttering Butterflies at 07:40