Since my dad died earlier this year, I've found it really difficult to blog again. I just ... I feel really sad still. Obviously I haven't lived with him for years now. So it isn't even walking into a room and expecting to see him or anything.  But it's still so many little things that feel like stabs to my heart when I remember them or they pop into my head. I got on a plane a couple months ago and I nearly laugh-cried remembering the time we flew somewhere together and the flight attendant lost control over the drinks trolley and it went barrelling down the aisle and my dad looks back and sees it and yells 'OH SHIT' just before it hit his seat and a can of Sprite exploded all over him. I pick up the phone sometimes and feel like answering 'Joey's Pizzeria, how can I help?' like he used to do sometimes just for the giggles.

I  sometimes find it hard to talk about him with other people though.  I guess I feel like only people who have lost their dads can understand. ...because so many people make comments that make it seem like things should be easier for me by now.  He died in February, that gives me 4 months to properly grieve, right, and now it's time to move on... is sort of how I get the feeling other people think of it.  But I still find it hard. I think partially because things were pretty good when I was younger. And then they got pretty bad. And then they got better again and just as things were getting to be the best they'd ever been between him and I he was diagnosed with dementia.  And I still feel ...robbed. I still feel like ... he should be here now.  We should all get to have more time. And I know I'm supposed to be feeling lucky or grateful or whatever for the time we did have. And I do. Of course I do.  But fuck it, I feel angry sometimes too. 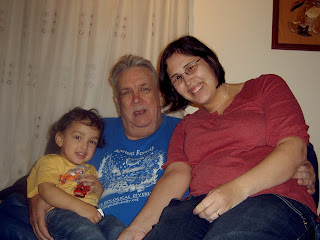 And this is the first Father's Day since he died.  I think all the firsts will feel like utter shit. This first Father's Day where I don't call him up or send him a card or do anything for him but remember. The 4th of July, where I'll think about how much he hated the sound of fireworks. My birthday, when he'd normally write me a cheque he can't really afford and send a birthday card addressed to 'Sugar pie, honey bunch' and sign his card 'Love you, Daddy' in his godawful handwriting. His birthday, where he'd get all embarrassed and pretend it was just another day.  The first Halloween where I'll think of the times (EVERY YEAR) where he'd scare off the first trick-or-treater by yelling 'WHAT DO YOU WANT?' and he'd end up emptying the bowl of sweets into the kid's bag to make up for it. The boys' birthdays. Christmas. The anniversary of his death.  All of it will be bittersweet. And I guess, sure, it'll all get better in time.  But I need that time. All of it, more of it. There's no magic number or amount of time that will fix this grief.

My dad was really funny. And smart. We used to chat on the phone every week and it didn't matter what the subject was ... whether it be politics or health or science or art or absolutely anything, we'd chat for hours about everything. He was a really devoted grandparent and an excellent storyteller. And I miss him.  I'm really glad he was my dad.  And I'm thinking of you today and every day.

Written by Michelle Fluttering Butterflies at 16:02