Reading With My Boys

I have two sons. E is 11 and will be starting Year 7 in September (eek!) and The Littlest is 9 and will soon be in Year 5.  I try my very hardest to continue to read to them.  Even as they are getting older and more independent.  Both boys read books on their own (I've tried so hard to get them to write reviews or discuss book in booktube videos to no avail) and I love that they do.  But I still want to read to them.  So on occasion, I will be discussing here the trials and tribulations of reading with my boys.  I hope you enjoy. 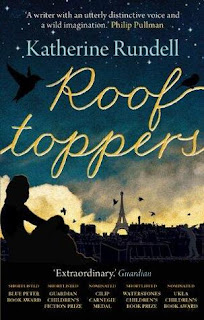 The Littlest is a pretty fussy reader.  He hasn't really found the right types of books that he enjoys yet, I don't think.  He was pretty keen on the Diary of A Wimpy Kid books (which children out there aren't, right?) and he's enjoyed other books in the past... books by Roald Dahl and David Walliams. Funny books, mostly.  He loves the Barry Loser books by Jim Smith and Tom Gates.  But outside of these books, he struggles.  So I sometimes like to choose books to read with him that I know he wouldn't normally pick up himself.  So it was with Rooftoppers by Katherine Rundell.

To be honest, I didn't pick up Rooftoppers with the intention of reading it with either child. I had read The Wolf Wilder last year and loved it and had heard high praise for her debut, so when I saw it in a charity shop a couple months ago it was a purchase for myself. Alone.  But E went away for a week for his residential trip at the end of Y6 and I wanted to start a book to read just The Littlest and I.  Rooftoppers caught my eye on my shelves and I thought I'd take a chance.

I'm sure The Littlest wasn't too impressed when I suggested this as our next read together.  He gave me this look like ...really? but I persevered with it and I'm really glad that I did.  It's an adventure story set in both London and Paris and the main character, Sophie, and her adoptive father, Charles are both absolute delights.  I want to befriend them both and go on adventures with them.  They feel like my people.

I love the way in which Charles parents Sophie. Giving her such freedom to express herself and her creativity.  But I also just love the magical, descriptive way that Katherine Rundell writes.  The words she chooses, the way she puts together this story made me fall half in love with her as well as her characters. And The Littlest? has roared with laughter at some of Sophie's antics and the things she says.  We haven't quite finished the story yet and he seems caught up in Sophie's story and if she ever finds her mother.  And I love that.  I love that this book is such a treasure to both me as a parent reading it aloud and also to my 9 year old son. What a triumph this book is!
Written by Michelle Fluttering Butterflies at 08:00