Mini-Reviews: The Great Godden, The Gravity of Us and Giant Days 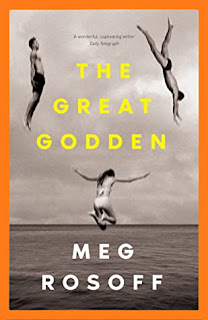 The Great Godden by Meg Rosoff

I was really looking forward to reading The Great Godden by Meg Rosoff. I've really enjoyed her books in the past and the description of this one sounded really appealing - a big family spends the summer at their holiday house by the sea - and they're joined by these two boys, one of whom is the mysterious and charming Kit Godden and what follows is this summer of love. Everything about that appeals to me.  Summer, beach house, love.

I thought The Great Godden was written really beautifully written as is to be expected from Meg Rosoff, and I loved the lazy, summer days and the quirks of this family. But certain elements of the book just didn't work for me as well.

1) We are never told the name or gender of the main character. The reader, I guess, is left to make any conclusions on their own (as I did) but I don't think this worked very well.

2) I think maybe my expectations of this book based on the description versus what actually happens within the story were vastly different which hampered my enjoyment of the book. This is more of a problem with me and my own expectations rather than anything within the book?

I didn't feel emotionally connected to the characters, to the story or to the relationships throughout. I think I just wanted more. 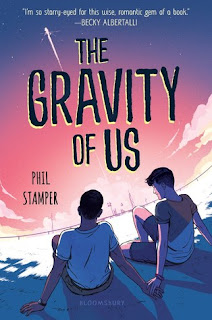 The Gravity of Us by Phil Stamper

The Gravity of Us by Phil Stamper was definitely an interesting read! I didn't know much about it going in besides the basics - a teenager with an online following is uprooted from NYC to Texas so that his dad can train as an astronaut for an upcoming mission to Mars and falls in love with another astronaut's son. But there was definitely a lot more to this one.

There was a really interesting thread of science throughout this whole book and that was a really enjoyable aspect to the novel. Some of my favourite elements of The Gravity of Us included some background information that goes on behind the scenes at NASA.  I really wanted to know more about the dirt and how it's being analysed!

There was also the reality TV elements to the story which  showcased rather unfavourable sides to journalism but also explored some other types of media and attempted to make a point about what viewers want vs. what TV producers think viewers want. It was interesting though I wished the author had pulled back slightly on some of it. Some of it was a little heavy-handed and a subtler approach could possibly have worked better (for me).

On the whole I thought Cal and Leon's relationship was ADORABLE if slightly quick on the uptake. Cal was insufferably self-centred and messed up a lot but that felt realistic too and he at least owned up to his shitty behaviour and called himself on it within the text which I appreciated. 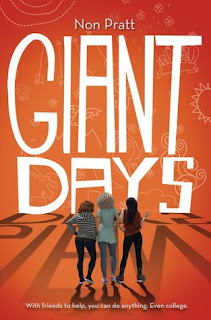 I'm a huge fan of Non Pratt and I've loved everything by her that I've read. I always look forward to her books and as well as this e-book from Netgalley, I also own a signed paperback of this Giant Days.

I enjoyed Giant Days and really related to a lot of it - being unsure of mixing old friends with new, clinging to friendships that aren't as genuine as I'd like them to be, the uncertainty of new things, being away from home. It felt unusual to read a story like this one that explores this new world at university and was definitely a pleasant change from some of my usual reading. I absolutely wish there were more university-based stories.

I think the reason that I didn't enjoy this book as much as I'd have liked is that there seemed to be threads of story lines that were teased in this book (characters' sexuality, for example) that will probably be explored more in further volumes of the graphic novel and also the second half went into some territory that I didn't feel was relatable which felt jarring alongside all of the actual relatable university stuff.  Still, it was an enjoyable way to pass a few hours!
Written by Michelle (Fluttering Butterflies) at 09:00