Listen to your voices! 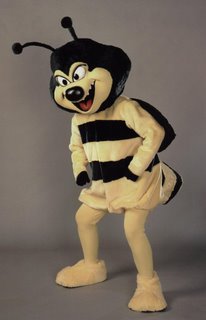 I can't be bothered to think of something to post, so here's an email I just sent. Honestly people, listen to that voice!

I'm a cripple for life! I can't stand! Oh my god, my foot hurts soooooo much. You know that voice in your head (you must have a voice too, right?) that tells you stuff, and then if you don't listen to the voice something happens that's not pleasant that wouldn't have happened if you'd just listened to the voice? Do you know what I'm saying? So yesterday afternoon, I was going to take Boy out to play in his paddling pool, and as I went outside, my voice told me 'hmm, probably better if you put some sandals on' but you know, I don't like wearing stuff on my feet so I totally didn't listen, and now I can't walk. Well, actually, I can - but people offer to do stuff for me and give me lots of sympathy when I'm Limpy, so I'm kind of milking it out here. I've rounded up some suspects for said injury: 1) a nasty red fireant may have bit me. There's loads of them out in that garden. 2) a weird shaped twig with an angry looking tip was found in the vicinity of the crime and could have dug its way into my flesh. 3) also found nearby was a dead bee, who may have perished after visciously attacking me. I don't know which one to pin the attack on. Shame.
Written by Michelle Fluttering Butterflies at 13:15