On moving to England 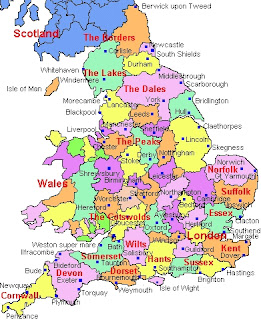 My friend Shadowfalcon is moving to Australia for a year. It's a huge change. And I felt somewhat bad that I may have contributed in the decision making process in that she's seen how happy I've become after moving to England almost 7 years ago. Though I am happy now, that wasn't always the case.

I moved to England a few weeks after my 18th birthday. I wasn't able to work, I knew nobody apart from N's family (his mother and older sister) and N's friends. In the beginning, N and I lived in a cosy flat nearish to the High Street. Though I would have been able to easily walk to the shops, I never did. In fact, I hardly left the flat. With N at work, most days I had to force myself to change out of my pyjamas. I didn't eat properly, I couldn't bring myself to do the dishes or make the bed. I was slowly sinking into depression, even with my wedding day just a few short months away. I ended up putting on 10-15 pounds in less than 4 months. My wedding dress had to be taken out to the very limit the morning of the ceremony. N did his best to cheer me up - bringing me flowers and jigsaws and books, there were the wedding plans. We had his friends over quite often on the weekends and we'd go out with them. But they all felt like N's friends. My own friends back home in America slowly stopped responding to emails, and I had never felt more alone. To make matters worse, I didn't get along very well with N's family. I hadn't lived with a 'proper' family for many years and I did so many things wrong. We held different opinions on important matters, and all of us were too set in our ways to compromise when N and I ended up giving up our flat and moving in with his mother after returning from our honeymoon. Things got better when I started my first job, it gave me purpose and I lost a lot of weight just by getting up each day and moving around instead of slumping somewhere feeling sorry for myself. I started making my own friends slowly, through work. But at the same time, things got worse between me and N's family. The house had turned hostile, with doors slamming and shouting and name-calling. On an emotional level I felt inadequate and rejected, as yet another mother-figure had disapproved and disliked both me as a person as well as the choices I had made with my life.

But it did get better. But it wasn't overnight. I had to slowly get used to another culture, with its own language and customs. A new set of currency to deal with, driving on the other side of the road. Everything was such a shock to the system. I wasn't able to understand some regional accents in the first year or so that I was here. I felt stupid and humiliated everytime I had to ask someone at work to explain what a specific term meant or if I had to ask them to repeat what had just been said. I was laughed at for using Americanisms and people always asked questions about America that I didn't know the answers to. After telling someone new that I was American, many would say 'oh! I have a cousin/uncle/friend who lives in Texas/Florida/New York - John Smith, do you know him?' but wouldn't stick around long enough to hear that Oregon isn't anywhere close Texas/Florida/New York.

It wasn't easy to begin with, but the journey has been worth it. I am happy. I have a wonderful husband, a beautiful son. We have a nice home in a good area. My mother in law and I are actually quite close, I have good friends. I know all the right lingo, I know to stand on the 'correct' side when on an escalator, I can spell 'kerb' correctly and I feel like I fit in. My accent is so corrupted that people no longer say straight-off 'you must be American' instead they say 'your accent sounds like you might not be from these parts orginally' and that works for me.

My advice to anyone that is considering moving abroad? Stay at home. (or, get out and meet new people anyway you can - join a club or a class, anything to put yourself out there more. Soak in the new culture and learn quickly and adapt as soon as possible. Cultivate relationships with the people you DO know in the country and compromise.)
Written by Michelle Fluttering Butterflies at 14:46