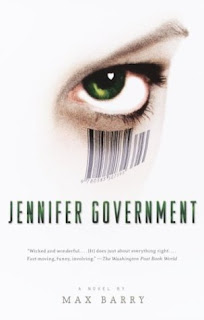 I finished Jennifer Government last weekend. I wanted a title on my list that was sort of light-hearted and fun. My husband had read this book previously and he'd said it was funny and even though I know his reading style and mine are very different, I gave this book a chance.

I do like the premise of it... it's set in a near-future where America has taken over half the world and consumerism and marketing campaigns have gone wild. People take on their employer's company name as their surname and nearly everyone is employed and tax has been abolished which means public institutions like schools and the police have become corporate and reliant on funding either from a big business or on an individual basis.

It all begins rather grimly with a Nike marketing campaign for a new brand of trainers which sets off a complicated and sad group of events which really illustrate how little value is placed on human lives, on relationships and how greedy and self-obsessed this future has become.

Though I did find some parts disturbing in its accuracy, I found that the novel was a bit over-the-top, that none of the characters were likeable and the whole feeling of the book was that it was written by a man, for a man. I found there to be lots of unnessary violence and I wasn't too impressed with the dialogue. I struggled to finish the book but I don't regret the time I did spend with it.
Written by Michelle Fluttering Butterflies at 21:43