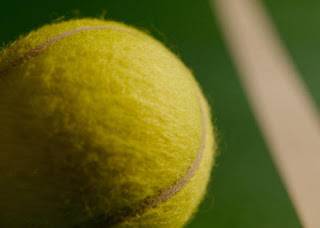 I've been fiddling around with this list of goals for awhile now. First it was called my 'list of things to do before I'm 40' and then it turned into 'before I die' but that sounded too morbid, so now I'm calling it a lifelong challenge. But instead of listing everything all at once, I think I'm going to give it to you in small chunks. That way it'll give me some more time to make a proper list anyway.

For my first installment, I thought I'd go with sports. A fitting theme, seeing as how the Wimbledon women's final was this afternoon, and I've just read a blog post just now about how the Olympic trials are going on in America, and a 41 year old woman, Dana Torres has just qualified for the swim team. (I love swimming, don't even get me started about my family and swimming.)

And so for number 1 on my list: I'd love to go to Wimbledon. Not necessarily for the finals, just anytime will do. We used to live quite close to Wimbledon, but the thing is you can't buy the tickets in advance (that I know of), you just have to queue on the day and hope you get in. Whatever, some day that will be me (and hopefully the boys) queuing up and enjoying the atmosphere. With or without the rain, but definately with the strawberries.

When I was living in America, we used to go to quite a few live sporting events. Mostly university games, but I've been to see NBA basketball games and Major League baseball games a lot. It was one of these things that we did and I have great memories of. So, really - any major sporting event would do... rugby at Twickenham stadium, a football match somewhere. But I kind of have my heart set on the tennis. Just don't expect me to explain any of the rules or anything.

Then there's the Olympics. London 2012, I will be there. Don't care what I see, I just want to be there. And so I shall.

What about you? What's on your list?
Written by Michelle Fluttering Butterflies at 22:14