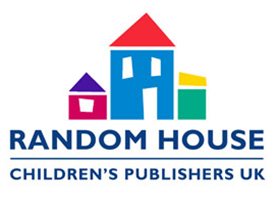 I do so love going to the Blogger Brunches held by Random House Children's Books.  There's always a really great atmosphere, plenty of book talk and excitement, cool authors and most importantly, homemade goodies!  The ladies at RH really spoil us book bloggers in this respect :) Sadly, I didn't get photographic evidence of it this time, but next time I promise I will...

The blogger brunch had been put off for a few months because of snow earlier in the year but hearing about the wonderful books being published by Random House this year and hearing authors Jonathan Stroud and Amy McCulloch were definitely worth the wait!

The brunch started off with some nibbles and chat before sitting down to hear about great books.  We sort of skimmed over the January/February titles - The Last Minute by Eleanor Updale, The Tragedy Paper by Elizabeth LaBan, How To Fall by Jane Casey, Skylark by Meagan Spooner and Rat Runners by Oisin McGann - all of which sound amazing and you really should look them up if you haven't already heard of them!

Next we had a look at some books coming out later in the year.  There was a special vlog from Helen Grant, the author of Silent Saturday which comes out in early April in hardback.

Seventeen-year-old Veerle is frustrated with life in suburban Brussels. But a chance encounter with a hidden society, whose members illegally break into unoccupied buildings around the city, soon opens up a whole new world of excitement - and danger.


Then we talked about The Kissing Booth by Beth Reekles, and how she's a teenage girl in Wales who has been very successful on Wattpad before publishing this, her first book!

The Kissing Booth by Beth Reekles (2nd May)

Meet Rochelle Evans: pretty, popular - and never been kissed. Meet Noah Flynn: badass, volatile - and a total player. And also Elle's best friend's older brother... When Elle decides to run a kissing booth for the school's Spring Carnival, she locks lips with Noah and her life is turned upside down. Her head says to keep away, but her heart wants to draw closer - this romance seems far from fairy tale and headed for heartbreak. But will Elle get her happily ever after?


And then a bit was mentioned about a book I'm very much looking forward to, ACID by Emma Pass.  The main character of ACID is meant to be pretty bad-ass, but then you can tell that from the cover, right? She's looking fierce!


I've not read anything by Anne Fine as yet, but I really love the sound of her new book, Blood Family!

Edward is four years old when he is locked away with his mother by her abusive, alcoholic partner, Harris. By the time an elderly neighbour spots his pale face peering through a crack in the boarded-up window and raises the alarm, he is seven.


And I think The Child's Elephant by Rachel Campbell-Johnson could pull a few heartstrings when it's published in May!  I'm not sure I would have picked it up if I hadn't heard the publicists of RH talking so enthusiastically about it.

The Child's Elephant by Rachel Campbell-Johnson (2nd May)


And phew, how creepy does this next book sound?! Ghosts and china dolls and ... I'm getting chills just thinking about it.

Zach, Poppy, and Alice have been friends forever. And for almost as long, they’ve been playing one continuous, ever-changing game of pirates and thieves, mermaids and warriors. Ruling over all is the Great Queen, a bone-china doll cursing those who displease her. But they are in middle school now. Zach’s father pushes him to give up make-believe, and Zach quits the game. Their friendship might be over, until Poppy declares she’s been having dreams about the Queen—and the ghost of a girl who will not rest until the bone-china doll is buried in her empty grave.

Zach and Alice and Poppy set off on one last adventure to lay the Queen’s ghost to rest. But nothing goes according to plan, and as their adventure turns into an epic journey, creepy things begin to happen. Is the doll just a doll or something more sinister? And if there really is a ghost, will it let them go now that it has them in its clutches?


There was a bit of swooning over a certain Alejandro next.  Victoria Lamb won the RNA award this year with Witchstruck and the sequel, which I'm pining for, Witchfall, will be out in July!

London, 1554. At the court of Mary Tudor, life is safe for no one. The jealous, embittered queen sees enemies all around her, and the infamous Spanish Inquisition holds the court in its merciless grip. But Meg Lytton has more reason to be afraid than most - for Meg is a witch, and exposure would mean certain death. Even more perilous, Meg is secretly betrothed to the young priest Alejandro de Castillo; a relationship which they must hide at all costs.


And did you read Crusher by Niall Leonard? I decided to ignore the 'he's-the-husband-of-EL-James' stuff and read it ... and I really liked it! The sequel, featuring Finn Maguire again, will be out in September and I shall definitely be picking it up!(And the Crusher paperback is out in June!)


There was talk of a new series by Susan Cooper in August! And also Lauren Kate's new book, Teardrop!  A new series about cyber-hacking by James Dashner sounds pretty interesting. And of course, #nobleconflict stirred up some curiousity!

But the real highlight of the blogger brunch were the two author talks by Jonathan Stroud and Amy McCulloch.

First up, Jonathan Stroud talked about his new series Lockwood and Co, which is about teenage ghost hunters.  It sounds absolutely brilliant already, but then he pulled out a backpack filled with things one might need to hunt ghosts ... a chain, iron shavings, a sword, even a teapot!  The book sounds funny and scary and all kinds of awesome! I really cannot wait.

A Problem has occurred in London: all nature of ghosts, haunts, and spirits are appearing throughout the city, and they aren't exactly friendly. Only young people have the psychic abilities required to see - and, hopefully, eradicate - the supernatural enemies. Many different Psychic Detection Agencies have cropped up to handle the dangerous work, and they are in fierce competition for business.

In THE SCREAMING STAIRCASE, the plucky and talented Lucy teams up with Anthony, the leader of Lockwood & Co, a small agency that runs independent of any adult supervision. After an assignment leads to both a grisly discovery and a disastrous end, Lucy, Anthony, and their wise-cracking colleague, George, are forced to take part in the perilous investigation of one of the most haunted houses in England: Combe Carey Hall. Will Lockwood & Co. survive the Hall's legendary Screaming Staircase and Red Room to see another day? How did the Problem originate, and how can it be solved?

We were given a chapter extract of this book which I've been itching to read ... 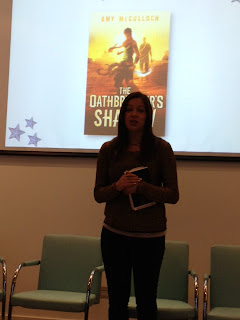 And then, Amy McCulloch came in and talked a bit about The Oathbreaker's Shadow, the first of a duology and how she took inspiration from Mongolian folk tales.  And then she read from a scene from the book!


Wow, was the whole morning so much fun!  It's always amazing to go to a book event like this, hear about some wonderful books and chat with some great bookish people (editors, authors, publicists and other bloggers!) Thank you so much to Random House for organising such a great event!   (And for the incredible goody bag we all went away with...) 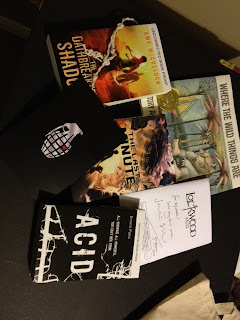 Written by Michelle Fluttering Butterflies at 08:08

Email ThisBlogThis!Share to TwitterShare to FacebookShare to Pinterest
Labels: Books, random house, ukya in 2013, YA