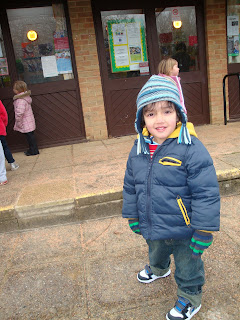 Did I mention that Wednesday was Elliot's first afternoon at pre-school? N took a half day especially for it. We knew that Elliot seemed excited to go, but we weren't sure how he'd take the idea of us leaving him there. We all walked there together, waited until the doors were open, I took off Elliot's coat and hat and gloves and then he just ran off... he had this silly little grin on his face the entire time he was there. I had to go up to him in the middle of playing and tell him I was leaving. He gave me a hug and said 'I love you' but I could tell he was so much more interested in this new place than he was in me leaving. Which is a good thing, it's great that there was no difficult transition period. But it didn't stop me from being a little teary-eyed all afternoon. When I got home, I curled up on the sofa with a blanket and put a movie on to try to distract myself from the fact that my little boy is so grown up.
Written by Michelle Fluttering Butterflies at 06:51

Email ThisBlogThis!Share to TwitterShare to FacebookShare to Pinterest
Labels: Elliot, I'm having a heartattack just thinking about how quickly you're growing up