It's been exactly a week since Littlest' birthday party, but it feels like an event so far distant that it feels weird to be talking about it still. Not that we didn't have a good time, but it feels far away already. 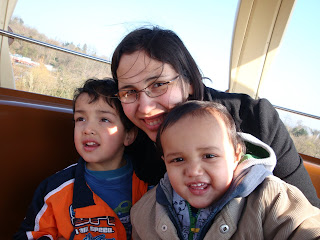 Then we got on the boats. I love Boating School. There's a great picture of Littlest and I being sprayed by the elephant and I'm cringing away from the spray and Littlest has hardly noticed it with a huge smile on his face (but I chose to share this one instead but I look better in this one!). I love that Littlest had such a good time. We tried really hard to only go on rides that Littlest was allowed on and we kept him out of the pushchair for as long as possible. He had a big grin on his face most of the day. We took hundreds of photos but most of them include N, so that's the lot, I'm afraid. 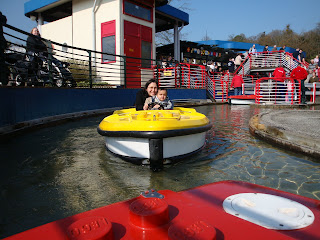 Here's a picture of Littlest and his birthday cake. We ordered this from M&S and I thought it turned out fantastic. Littlest is such a little monkey that it was quite appropriate for us to have a wild animal theme for his party. The cake was nice as well. 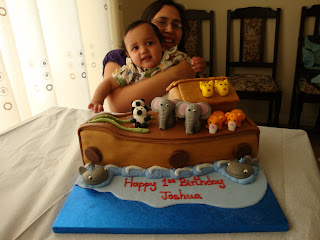 At the children's party in the morning, we hired this fantastic lady from a company called Bambinos Active to entertain the children. She was brilliant. So enthusiastic and full of energy. She had all those little kids running around and laughing. She even got all of us parents to run around like crazy when the parachute came out. Never had so much fun at a children's birthday party ever. Seriously, she comes highly recommended from me! 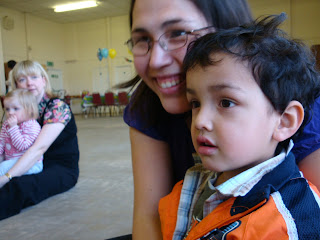 And here, of course, is my obligatory birthday boy and the wrapping paper photo. Didn't it come out great this year? What a happy, chubby face. I still can't really believe that a year has gone by already. And what a character he is. I've never met a baby with more self-confidence than Littlest has. He'll set his mind to something and he goes after it. He plays on his own like he doesn't need anyone. He's so happy and easy-going. He loves his food. He loves his Mama. 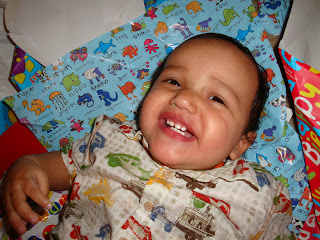 I hope you had a great day, Little Boy.