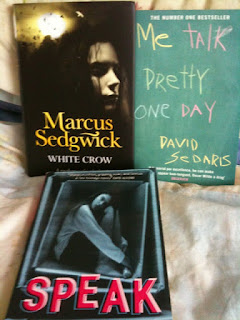 The David Sedaris and Speak were picked up at a local charity shop. I've heard David Sedaris is quite funny but I've never read anything by him. I've already Speak, but wanted to read it again after the whole #speakloudly thing as well as Banned Books week. White Crow was a book swap that I'm very happy about :) 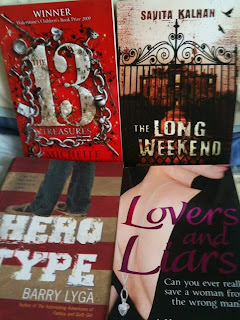 I won two twitter giveaways this week. The first was via Michelle Harrison, the author of 13 Treasures and 13 Curses who was giving away one of her books as well as The Long Weekend. Michelle is absolutely lovely and I can't wait to read both of these books. Then I won Lovers and Liars AND a signed copy of Barry Lyga's Hero Type arrived after I'd noticed he was sending free books out to book bloggers in order for us to host giveaways. So look out in the future for my giveaway of Hero Type. (I adore Twitter) 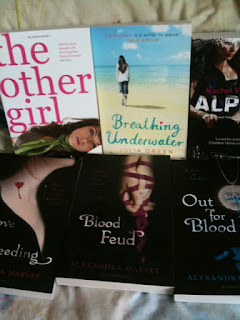 Alpha was sent as part of a blog tour that will be happening later in the month. And the rest were from the wonderful people at Bloosmbury :) And that is it for me this week!

Which books arrived into your home this week? Have you read any of these books? Where should I start?
Written by Michelle Fluttering Butterflies at 13:41