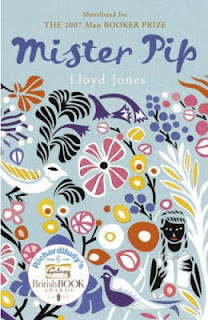 Mister Pip is one of those books that has been talked about a lot on other book blogs. I'd seen the name, may have glanced at some of the reviews, but nothing really sunk in. Maybe my brain turned off at the mention of war on a tropical island which is very far removed for me and my life. And then it occurred to me the significance of the title and its connection with Great Expectations by Charles Dickens. I've never claimed to be very bright, clearly!

Mister Pip is told from the point of view of a young girl on an island in Papua New Guinea (I believe) during a civil war. Most of the men on the island have left, leaving the women and children to fend for themselves and carry on as best as possible when the only white man left on the island, Mr Watts, re-opens the school and uses Great Expectations as his only teaching guide.

I loved the beginning more than the ending. I loved watching Matilda fall in love with Great Expectations, seeing that connection being made, the escape into a new world and place inhabited by other people. I especially enjoyed reading of the islander's own customs and beliefs as the students' mothers come in to teach what they know. I enjoyed the conflict between Matilda's new-found respect for Mr Dickens and how it went against her mother's religious beliefs.

But halfway through the novel, when the turning point happens the whole tone of the novel switches to something more dark and untouchable. Reading the second half of the book seems to negate some of the first half in order to tie up unresolved issues. I don't want to spoil the plot and I still very much enjoyed this book, I just felt that a lot of the magic of the first half of the book was lost amongst the ending.

Have you read this book? What do you think of books within books?
Written by Michelle Fluttering Butterflies at 07:24