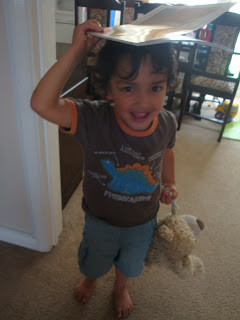 It was called Kipper's Monster. Tiger had a brand new torch and he said 'we'll camp in the woods tonight and it will be really dark in the woods.' Dark, dark, dark! And then there was a snail and it's shadow. So they went to Tiger's house and they read their book together.

Oldest puts on his 'reading voice' sometimes when he's quoting a book directly. We've read Kipper's Monster so many times that he can quote large sections of it. I was surprised that he knew the title of it though, I rarely tell him the titles ofbooks before we read them and he usually calls this book 'the ghost book, with Kipper.' It's one of those books that I think scares Oldest just a little bit, but he continually asks for it at storytime before bed.