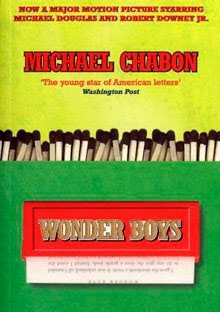 Sorry for the lack of reviews around these parts, I'm in the middle of a writer's block and I'm hoping that writing reviews in a reverse order will help.

So, Wonder Boys by Michael Chabon. I didn't love it as much as I loved The Adventures of Kavalier and Clay, but that it isn't to say that I didn't love it all. Part of the reason is that I'd seen the film version with Michael Douglas (who I don't generally like) many years ago and was familiar with the storyline. I did start it thinking 'I've seen the film, it's very similar, why carry on?' but I'm glad I did. The characters (the male ones, at least) are more developed, the story is slightly more intricate, and once I got going, the experience was better with the book. What I loved about Wonder Boys is the combination of the very ordinary life occurrences seated right next to the very bizarre.

Grady Tripp is our narrator of Wonder Boys, a middle-aged, constantly stoned author/professor who is struggling to finish his follow-up novel after winning some literary award. It isn't writer's block he's facing, but quite the opposite. His manuscript is well over 2,000 pages and he just can't stop writing the thing. Then his friend and agent, Terry Crabtree comes into town and a series of bizarre events occur taking Tripp on this weird and wonderful weekend journey.

What I love most about Wonder Boys is how Chabon was able to juggle so many storylines and characters. We have Tripp, his friend Crabtree. Tripp's wife, Emily. His mistress, Sara. James Leer, a suicidal young student and writer. All with their own quirks and interesting backstories and habits. And we have this weird plot involving a dead dog, a boa constrictor, Marilyn Monroe's jacket, a Passover dinner involving three Korean Jews, and a tuba, of all things. And I love that the book isn't really about any of those things, but more about the interactions between the characters as well as the pitfalls and pressures of writerly life.

Even though the book really chronicles the many ways in which Grady Tripp's life is spinning out of control, I found it all to be hilarious. I couldn't stop snorting at the absolute weirdness of it all. I'd have loved to be at that Passover dinner with Tripp's wife and in-laws, but I'd also have liked it if some of the female characters had more depth to them that Tripp, Crabtree and Leer had. Still, overall a wonderful experience. I'd recommend Wonder Boys as a good stepping stone into Chabon's work.