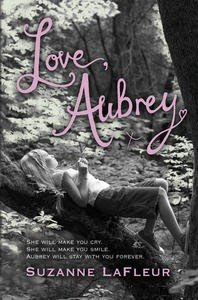 Something terrible has happened. Eleven-year-old Aubrey is on her own. ‘It was fun at first, playing house. Nothing to think about but T.V and cheese. A perfect world.’ She’s determined to hide away and take care of herself, because facing the truth is too much to bear. ‘I couldn’t let anyone know that I was alone. I was staying right here.’ But with the love of her grandmother and the letters she writes, can Aubrey begin to see that even though she’s lost everything – all is not lost?

Oh dear, where to begin with this book? Love, Aubrey wrenched out my heart and stomped on it. But in a good way. I started it in the late afternoon/early evening and I couldn't bear to put it down. By 1am the following morning, I had finished it and was bawling like a baby in my bed. Actually sobbing big fat tears. So be warned! This one is a weep-inducing book.

Before I started reading this book, I knew it was going to be sad. But I thought that 11 year old Aubrey would be on her own throughout the novel, and that isn't the case, thank god. She is eventually rescued by her grandmother and taken somewhere safe and stable. But that time spent on her own? Using her birthday money to buy Spaghetti-Os and a pet fish for company? Broke my heart. The whole thing did.

As the reader, you aren't told straightaway all the details of how Aubrey is left on her own, instead the story is drawn out a bit and you can piece it together through some of Aubrey's flashbacks of life before and through her letters. When she goes to live with her grandmother, things are a bit difficult for everyone. Aubrey struggles to adjust with her new life, the different relationship with her grandmother. She's feeling angry at her mother, grief at the loss of her father and little sister. You can see how hard it is for her to trust again and the deep depression she Aubrey is in, as she doesn't want to get out of bed or just sits and watches television and avoiding any conversations where she might have to feel or remember.

Eventually though, with the help of a new best friend, a guidance counsellor and her grandmother, Aubrey is able to fight her way to back to some semblance of a normal 11 year old girl who goes sledding in the snow and has pizza parties on her birthday instead of worrying about her loved ones abandoning her and how she'll cope.

Love, Aubrey could have been more heavy-handed with the emotional issues, but despite how it sounds, it really isn't. In some parts, mostly at the beginning, it's like we're really seeing things from Aubrey's perspective as she tries to detach herself from feeling so much so that it all doesn't overwhelm her. But gradually, Aubrey is able to let out a little of what she's feeling and when that happens? Be ready to get walloped by the strong emotions. Keep tissues handy.
Written by Michelle Fluttering Butterflies at 08:43