REVIEW: The Cardturner by Louis Sachar 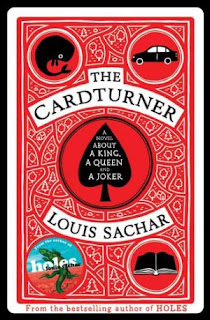 When Alton's ageing, blind uncle asks him to attend bridge games with him, he agrees. After all, it's better than a crappy summer job in the local shopping mall, and Alton's mother thinks it might secure their way to a good inheritance sometime in the future. But, like all apparently casual choices in any of Louis Sachar's wonderful books, this choice soon turns out to be a lot more complex than Alton could ever have imagined. As his relationship with his uncle develops, and he meets the very attractive Toni, deeply buried secrets are uncovered and a romance that spans decades is finally brought to a conclusion. Alton's mother is in for a surprise!

I am very surprised with The Cardturner by Louis Sachar. I've read a couple of other books by Louis Sachar, most notably Holes, and loved them, so on that basis alone, I picked up this book. Well, that, and the cover is really pretty.

And then I found out it's a book about bridge. And I'll admit, that put me off for a little while. But then it came up to the time where I either had to read The Cardturner or return it to the library and now I am so glad that I chose to read it!

I adored The Cardturner. Right from the start, I really liked Alton's character. Alton's mother kind of forces this relationship between him and his ageing and rich Uncle Lester in the hopes that their family will be rewarded in his will. And Alton goes along with it all, and eventually ends up as Uncle Lester's (or Trapp as he is mostly known) cardturner at his weekly bridge club. And if you've never played bridge or don't know the rules and the intricacies of how to play bridge, then you will by the end of the novel. Sachar doesn't shy away from explaining things in detail. For people who aren't as intersted in that aspect of the book, you can skip ahead using the symbols that indicate a detailed description is approaching in the book and read a condensed version. Myself, I read every word of it, because I found it all to be fascinating!

Part of the appeal for me, was this relationship between Alton and Trapp. Trapp is kind of moody and gruff and Alton tries so hard to please his uncle. Alton realises what an exceptional person Trapp is and how his memory skill is extraordinary in terms of his bridge game. Trapp is able to remember all of his cards, his partner's cards and all the moves his opponent's played both in current games and in the past. After seeing his uncle play, Alton sees bridge more as a mental sport than a game and does his best to learn more about bridge. Even roping his little sister Leslie (who refreshingly, isn't annoying at all!) and his best friend Cliff, and Trapp's former cardturner, Toni into playing bridge with him. On the way, he uncovers some of his family's and Trapp's history and uncovers a really sweet/sad romance that had been shelved for forty years.

One of my favourite aspect of The Cardturner is this philosophical conversation between Trapp and Alton about how ideas and concepts never die. I thought the way that this idea ties into the story was interestingly done with Toni's mental health and the way in which Trapp and Annabel were connected. But lots of bridge! As a person interested in psychology, I found the limits and capacity of Trapp's memory to be absolutely captivating to read about. But also this transformation of Alton from someone who lets others walk over him into somebody who knows what he wants and goes after it.

A very interesting book, one in which I stayed up very late reading in order to find out how it ends! Don't be put off by the bridge, people!
Written by Michelle Fluttering Butterflies at 09:12