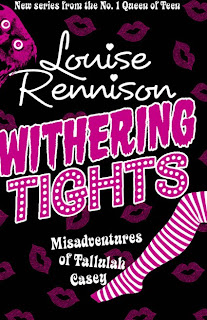 On the whole, it’s not quite the showbiz experience Tallulah was expecting… but once her mates turn up and they start their ‘FAME! I’m gonna liiiiive foreeeeeever, I’m gonna fill my tiiiiights’ summer course things are bound to perk up.
Especially when the boys arrive. (When DO the boys arrive?)
Six weeks of parent-free freedom.
BOY freedom.
Freedom of expression…
cos it’s the THEATRE dahling, theatre!!

Are we all huge Louise Rennison fans like me? I adored her Georgia Nicolson series and had to read her latest installments STRAIGHT.AWAY. So I was thrilled to hear that Louise Rennison was releasing this new series.

I think it'll take some time for me to stop comparing Talullah Casey with Georgia Nicolson. When I first began Withering Tights, I thought of Talullah as not quite as funny and crazy as (her cousin) Georgia. Instead of having a big nose and large basoomas, Talullah has long legs, wonky knees and no corkers to speak of. But 14 year old Talullah, at a Yorkshire school of performing arts is definitely just as boy-crazy and clueless about boy-goings-on.

She's sent off to some small little town, where she's staying with an absolutely nutty family, next door to a pub where the hottest boy around lives. There's no shops at all, but Tallulah soon makes friends with a gang of girls at her new school. Vaisey and lisping Honey, Flossie and little Jo. And just like with Georgia, they all get into some almighty embarassing scrapes.

Meeting the local boys as they're dancing around a tree. Starring in a bike ballet and doing Irish dancing at the most inopportune times. I did find Talullah to be absolutely hilarious. But also vulnerable at the same time. You can see that she's really trying hard to fit in at this school. But all of her friends can sing and dance and Talullah just doesn't know where she fits in at all.

The Yorkshire dales made for an interesting setting and I loved the inclusion of Wuthering Heights as the backdrop to everything. Especially the connection between Heathcliff and Cain, the local cad. My favourite character, however, is Ruby. The plucky little girl who lives in the pub and shows Talullah the owl eggs she's found. Some of Ruby's dialogue had me seriously laughing out loud.

It's an excellent start to the new series, with a fab new heroine, a great supporting cast of friends and some interesting new boy crushes! Bring on the next book!
Written by Michelle Fluttering Butterflies at 08:34