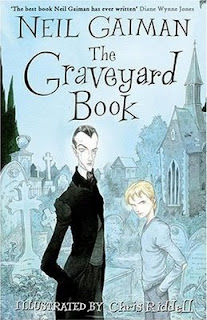 When a baby escapes a murderer intent on killing the entire family, who would have thought it would find safety and security in the local graveyard? Brought up by the resident ghosts, ghouls and spectres, Bod has an eccentric childhood learning about life from the dead. But for Bod there is also the danger of the murderer still looking for him - after all, he is the last remaining member of the family. A stunningly original novel deftly constructed over eight chapters, featuring every second year of Bod's life, from babyhood to adolescence. Will Bod survive to be a man?

Oh, how I do love Neil Gaiman. I read The Graveyard Book more than a year ago and adored it then, but I decided to choose this book as my first selection for an online book group that I run. We read it in October and I thought it would make a spooky and fun read as we approached Halloween.

It was such fun to come back to this book. I love the illustrations by Chris Riddell, I found it added a little more atmosphere to the story. I didn't know beforehand that Neil Gaiman took inspiration from The Jungle Books by Rudyard Kipling, but instead of a jungle, he placed his main character in a graveyard raised by ghosts. I think it's an interesting twist, handled very well.

The story is that of a young boy whose family is murdered by a mysterious man in black. The boy is able to escape, and finds refuge in a graveyard. The ghosts in the graveyard decide to let the boy stay and he is adopted by The Owenses and called 'Nobody' - Bod for short. As Mr and Mrs Owens are not able to leave the graveyard, Silas is appointed his guardian. Silas is neither living nor dead, but is able to bring Bod clothes and food and information from outside. Bod grows up, doing his best to learn history and his letters from the ghosts around him. As Bod grows up, he soon realises that he is in danger and must face this man in black if he is ever to stand on his own and become a man.

What I love most about The Graveyard Book are the characters that we meet. Bod has a wonderful enquiring little voice. Brave and curious and quick thinking. But it's Silas who stole the show for me. Never directly named as a vampire but the reader is given small hints. Silas puts himself in harm's way in order to protect young Bod. Then there's Miss Lupescu, a Hound of Hell, who looks after Bod occasionally and teaches and protects him. There's Liza Hempstock, the witch-ghost. Each character teaches Bod what he needs to know in order to stay alive, to survive when the Man in Black arrives to finish the job that he's started.

The bit in the product description is fantastic, about Bod learning about life from the dead. It's an interesting concept and one that Neil Gaiman pulls off wonderfully with this book. The visuals, especially of the woman on the gray horse and that of the Danse Macabre are images that will stay with me for awhile. The Man in Black, and his associates the Jacks are wonderfully sinister villians and this really does make for wonderful reading for anytime of the year.
Written by Michelle Fluttering Butterflies at 09:27