REVIEW: How Not To Be Popular by Jennifer Ziegler 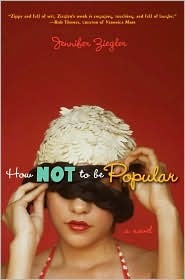 Maggie Dempsey is tired of moving all over the country. Her parents are second-generation hippies who uproot her every year or so to move to a new city. When Maggie was younger, she thought it was fun and adventurous. Now that she’s a teenager, she hates it. When she moved after her freshman year, she left behind good friends, a great school, and a real feeling of belonging. When she moved her sophomore year, she left behind a boyfriend, too. Now that they’ve moved to Austin, she knows better. She’s not going to make friends. She’s not going to fit in. Anything to prevent her from liking this new place and them from liking her. Only . . . things don’t go exactly as planned.

How Not To Popular by Jennifer Ziegler was such fun to read. I'd had my eye on it for awhile, but it sat on my shelf unread for quite some time. No particular reason, I think I was just waiting for the right time. And it came in very handy as I was in a desperate mood for something a bit light and romantic.

Maggie is such a great character. Her family are free spirited hippies, and as such, they go travelling around doing different, sort of off-the-wall things. For awhile it was fun, seeing different parts of the country, having new experiences and doing things that most people would never dream of. But for awhile now, Maggie hasn't been enjoying it. She doesn't like the constant moving, making new friends when she's just fallen into a crowd of people she likes at the old place. And this time it's different as well - she's leaving behind a boyfriend.

When Maggie's boyfriend decides they'd best break-up instead of trying to make a long-distance relationship work, in her heartbreak Maggie decides to give up. She gives up on trying to fit in at her new school, gives up on making new friends. Instead, she decides to do the very opposite. She figures if she's super unpopular and nobody likes her, that when she leaves, she won't have to deal with any heartbreak at all. It'll be no problem to leave then. So she creates a plan. An unpopularity plan, where she wears ridiculous clothing and does her best to push away the people that'd she normally befriend with ease.

But things really don't go to plan at all. Instead of becoming friendless and alone, Maggie finds herself surrounded by the less popular people. People who are pretty great, really. I think the life experiences that Maggie has lived through would mean that'd she be an interesting person to be around no matter what! And despite some of the pain that Maggie is feeling at her recent break-up, she really powers through and provides the reader with some hilariously embarassing scenes. I honestly wanted to hide my face in embarassment on Maggie's behalf sometimes.

Jennifer Ziegler has a great message for teenagers, told in a fun and funny way - be yourself, don't worry so much what other people are thinking, not judging people by their appearance or social standing in the fickle world of high school. It's a great story of finding a place to belong and of friendship. Plus it has quite a sweet new romance that I was really rooting for!

This one comes recommended from me!
Written by Michelle Fluttering Butterflies at 10:54