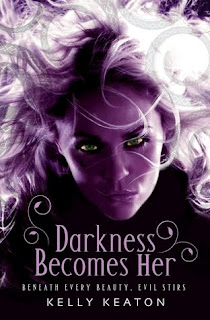 Ari can’t help feeling lost and alone. With teal eyes and freakish silver hair that can’t be changed or destroyed, Ari has always stood out. And after growing up in foster care, she longs for some understanding of where she came from and who she is.

Her search for answers uncovers just one message from her long dead mother: Run. Ari can sense that someone, or something, is getting closer than they should. But it’s impossible to protect herself when she doesn’t know what she’s running from or why she is being pursued.

She knows only one thing: she must return to her birthplace of New 2, the lush rebuilt city of New Orleans. Upon arriving, she discovers that New 2 is very...different. Here, Ari is seemingly normal. But every creature she encounters, no matter how deadly or horrifying, is afraid of her.

Ari won’t stop until she knows why. But some truths are too haunting, too terrifying, to ever be revealed.

I love being surprised by a book like I was with Darkness Becomes Her by Kelly Keaton. I didn't know anything about the book before picking it up and I thought I'd just go along for the ride and enjoy the story. At times, it feels like Darkness Becomes Her could have become too much, with so much going on and new elements added to an already bizarre new world, but for me, it worked. I was able to believe in each new twist to the story and I really had a great time discovering a different world with a new mythology.

Ari has always stuck out. Her hair and her eyes stand out and she doesn't fit in. She's lived her entire life in foster care and her life has been anything but easy. Now finally she's with a good family and she's kind of kick-ass in the family business, but when she finds out new information about her mother, Ari gets inadvertently sucked into a different life.

In Darkness Becomes Her, Kelly Keaton introduces us to a very different version of New Orleans. Many years ago, New Orleans was wiped out by several very severe hurricanes that made the city unliveable and most of the residents fled. In their place sweep in the Novem who begin to rebuild. What Ari comes to find out is that this new city, dubbed New 2 is now populated by 'different' people just like her - people who are part vampire or witch or shape-shifters. And for some reason, New 2's top families are interested in Ari. What lies behind Ari's strange hair and eyes? Why did Ari's mother commit suicide and leave Ari? Why are mysterious men keen on killing her?

This book is quite fast-paced and chock full of mystery and intrigue. There's action and romance and enough twists and turns to make it really exciting. We meet some really wonderful secondary characters and I think it's a great start to what looks like a fun new series. I especially love New Orleans as a setting, there's enough there of the different districts and atmospheres to really stand out in my mind. I can't wait to see where Kelly Keaton takes this story next!
Written by Michelle Fluttering Butterflies at 09:12