REVIEW: In the Sea There Are Crocodiles by Fabio Geda 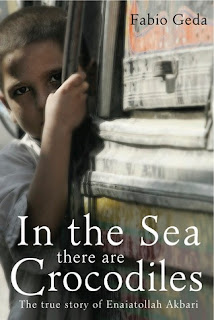 Oh, this book. It really had me in tears. What comes across the most for me as I was reading it is of the resilience of the human spirit and also hope in times of quite tragic events. It is quite the slim book, but I was gripped all the way through it and Enaiatollah and Fabio Geda really had a grip on my heart from the very first page.

In the Sea There Are Crocodiles by Fabio Geda is the fictionalised true story of a 10 year old boy from Afghanistan. His mother takes him over the border to Pakistan, tells him to follow three simple rules and then abandons him in the hope that her son will be better off away from the Taliban that has taken over in Afghanistan which has put him and his entire family at risk. What follows is Enaiatollah's brave journey as he struggles to find work, shelter and food across several different countries.

It's really an incredible story, this one. One that I won't forget for a long time. Enaiatollah goes through some horrific experiences - with people smugglers in particular, harassment from police and terrible living conditions - all in the hopes that one day he will find a place where he can belong and feel safe. It takes him five years, travelling and working through Pakistan, Iran, Turkey, and Greece in order to be granted asylum in Italy. One of the things that really struck a chord with me is Enaiatollah's memories the beauty and the good times that he had as a young boy in Afghanistan. When people think of Afghanistan, they think of the Taliban and of the terrorism and bad things that has come from that. He remembers a happy childhood in a beautiful place.

In the Sea There Are Crocodiles is written in a very lyrical but simplistic way, and I was pulled into Enaiatollah's story immediately. It really opened my eyes to the lives and experiences of refugees and other people who have left their homes in search of security and freedom. This was a really beautiful and at times difficult book to read, but one that remains hopeful in the belief that there is more out there and that things can and will be better.
Written by Michelle Fluttering Butterflies at 09:21