REVIEW: The Replacement by Brenna Yovanoff 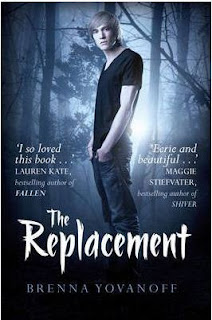 Mackie Doyle is not one of us. Though he lives in the small town of Gentry, he comes from a world of tunnels and black murky water, a world of living dead girls ruled by a little tattooed princess. He is a Replacement, left in the crib of a human baby sixteen years ago. Now, because of fatal allergies to iron, blood, and consecrated ground, Mackie is fighting to survive in the human world.

Mackie would give anything to live among us, to practice on his bass or spend time with his crush, Tate. But when Tate's baby sister goes missing, Mackie is drawn irrevocably into the underworld of Gentry, known as Mayhem. He must face the dark creatures of the Slag Heaps and find his rightful place, in our world, or theirs.

The Replacement by Brenna Yovanoff took me completely by surprise. It was sent via Lynsey's wonderful (now shut down) UK Book Tours. If I'm honest, I'd completely forgotten that I'd signed up for it at all. Perhaps I was drawn to the wonderful US cover of the book? I'm not entirely sure. When it did arrive, and I saw that it's a book about changelings, I wasn't so sure. When I did finally sit down to read it, I was really pleasantly surprised.

I loved Mackie straight away. I loved that aside from being this fairy changeling, he's just a boy trying to fit in during high school. He just wants to be a regular teenager with regular problems and to not be noticed. Except maybe by Alice, this girl at school. But also, maybe not even by her. And instead of regular teenage boy problems, Mackie has to deal with the fact that he is dying. Allergic to iron he can feel himself getting weaker and weaker. He'd like nothing more than to hang out with his best friend or play bass and ignore it all.

But when a classmate, Tate's sister is taken by this creeptastic Underground, Tate comes to Mackie for help. She wants change and a fight in order to get back her sister and all babies that are taken. But Mackie doesn't have the courage or the strength for that, but with Tate hounding him and his conscious asking him what he'd do if it were his own sister, it really spurs Mackie on to at least try. What follows are trips to the really quite creepy and disturbing Underground where Mackie must make difficult choices about who he is and where he belongs.

I loved how much of The Replacement is a study into Mackie's character. He goes through so much. Avoidance and denial, his struggles with what he is. It was truly wonderful to see the creepy and unsettling town of Gentry through Mackie's eyes. He also has some incredible support on his side in the shape of his sister, his best friend Roswell and Tate.

I'm not sure that I really got all of the information about the Underworld or the baby tributes because really, fairies aren't my thing at all. But I continued reading because of the strong characters and characterisations, the emotion that these kids go through and because of how sympathic and endearing Mackie Doyle is as a person. A very interesting and different book, one I'm glad to have read.
Written by Michelle Fluttering Butterflies at 09:36

Email ThisBlogThis!Share to TwitterShare to FacebookShare to Pinterest
Labels: Books, reviews, simon and schuster, YA