Having eagerly watched the trailers for Harry Potter and the Deathly Hallows Part 2, and being hugely excited to see the final film (*weeps*), I thought it only fitting that I gear up for the film by rewatching the seven movies before it. It'd been a long time since I'd seen the films from the beginning and I have had SUCH fun rewatching them.

Here's a few of my thoughts on them... 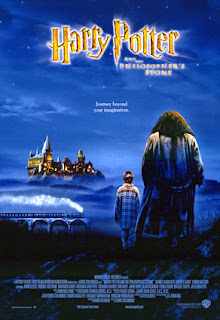 Harry Potter and the Philosopher's Stone - So I began the first film without any intention of writing a blog post, so I don't have as many detailed notes as for the others. But for me, this film is just utterly sweet and a lovely introduction to the magical world of Harry Potter and witches and wizardy. Every single time I heat the theme music, I get chills up my spine. It's so distinctive and brings back so many wonderful memories of these stories and of these films.

I think my favourite part of the entire film is the great relationship between Harry and Hagrid. I cried all over again, when Hagrid gives Harry his homemade birthday cake. (and again at the end when Hagrid gives Harry the photo of Harry's parents!) I think so many really emotional and poignant scenes throughout the movies (and books? I'm shockingly not as familiar with the books!) involve Hagrid thus making him one of my favourite characters.

But there's also Platform 9 3/4, the Hogwarts Express, Diagon Alley, Hogwarts! the sorting hat, that picturesque trip across the lake on the boats. I love everything about Hogwarts. The changing staircases and the portraits, the ghosts, the staff. Mr. Filch makes me laugh, as does Professor McGonagall. The Mirror of Erised makes me weepy though. And of course, we meet know-it-all Hermione and Ron. The ending was so much fun. I love wizard chess. And the fact that Neville stands up to Harry, Ron and Hermione makes me cry, especially when Dumbledore acknowledges it. I remember leaving the cinema after seeing the Philosopher's Stone feeling really excited about the series. I believe I'd only just read the first book and had the rest of the series waiting for me... 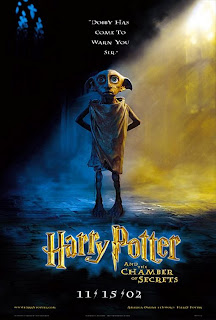 Harry Potter and the Chamber of Secrets - And then we have the second film. Which sadly, is my least favourite of the film adaptations. Something about Moaning Myrtle and Gilderoy Lockhart and the flying car just makes this film seem overly childish. Watching it again, it really isn't as bad as I remembered (this is the film I've seen the least amount of times) but I really think it picks up by the next film.

And I do love Dobby. That face with those eyes and those ears just steals my heart. And there is a lot more to the film to love. Our first glimpse of The Burrows and finally getting to see more of Mrs Weasley and Ginny, two of my favouritest characters. I'd love to be able to travel by floo powder ... or even by flying car! The scene where it's car versus whomping willow made me laugh.

But I just didn't care for Gilderoy Lockhart or the swooniness that occurs around him. The Polyjuice Potion was very fun though, and the bit where Fawkes swoops in with the sorting hat? Makes me cheer everytime. The bit where I cried in this film? When Dumbledore tells Harry that Harry must have shown him great loyalty whilst in the chamber, for Fawkes to have flown in. 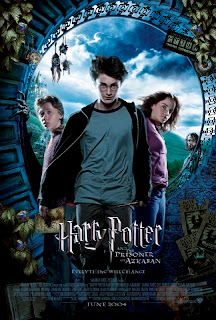 Harry Potter and the Prisoner of Azkaban - SO MUCH to love during the Prisoner of the Azkaban. Starting of course with the Aunt Marge balloon, which made me cheer. Followed by the Knight bus! How much would I ADORE a ride on that thing? Sign me up. And while it does start to get quite a bit darker than the first two films, with the dementors attacking Harry on the Hogwarts Express and the idea of Sirius Black being a murderous prison escapee out to get Harry, there is still enough light-heartedness to balance out this film beautifully. The boys in their dorm making animal noises, the fun that is Professor Lupin's lesson boggarts.

But there's so much to make me cry as well. This one is a sob-fest for me. I cried when Buckbeak is killed (and Hermione hugs Ron like she does!). I cried when Harry and Sirius are attacked by the dementors. But I cried the most at Harry's insistence that his father cast that Patronus charm. When it was him all along.

There's some really stunning sequences in this film. I love the whomping willow and the Knight Bus at the beginning. I thought the time-travel element to the story was so entertaining. And I am desperate for my own Marauder's Map! (I solemnly swear I am up to no good, etc etc!) 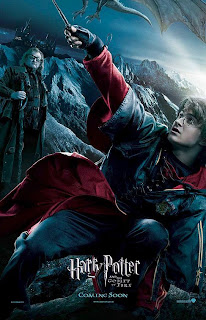 Harry Potter and the Goblet of Fire - What I loved about The Goblet of Fire is we get this fantastic creep factor right from the beginning with the snake. *shudders* I could already tell it was going to be a very dark film. We have both Harry and Ron sporting slightly ridiculous shaggy hair as Harry and the Weasley family make their way to the Quidditch World Cup! How exciting it all is. We're introduced to both Cedric Diggory (!!) and portkeys. Of course, it all goes wrong with the World Cup ending in fire and destruction and the Death Eater mark hanging in the sky.

And as we get to Hogwarts, everything steps up a notch with the two other wizarding schools joining together for the Tri-Wizard Tournament. It's all so exciting. Plus there's Mad-Eye Moody teaching the unforgiveable curses in Defense Against the Dark Arts and transforming Draco into a ferret! Why oh why was I not able to be a student at Hogwarts?! But of course, it isn't all fun and games (though there should always be more Fred and George hilarity!) with this divide between Ron and Harry and then of course, the heart-breakiness between Hermione and Ron at the Yule Ball. I absolutely adore Maggie Smith and Professor McGonagall teaching the Gryffindors how to dance. And then there's Neville! Neville is amazing character, so inobstrusive but so important and involved in so many of the trio's adventures. I heart him.

Of course, with every Harry Potter film (and the books, it goes without saying!) I cried. Not at the dragons, or the thing in the lake, but in the maze. And when the ghosts appear during the duel with Voldemort. Sobbed. Man, I love this series. 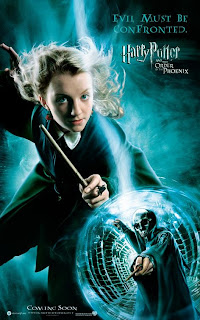 Harry Potter and the Order of the Phoenix - I don't have much written down whilst watching this film. Mostly just circled names (Luna Lovegood!!) and single sentences like 'Dudley and the Dementors' and 'room of requirements' - I absolutely love this film. I love how much Harry grows up and goes all teachery with Dumbledore's Army. I love how much of Luna Lovegood appears in this film as I heart her so much. I think the opening scenes with Harry and Dudley facing off to the dementors in the playground and then Harry flying through London are absolutely stunning to see.

I think it's quite an emotional film, with Harry feeling quite lonely and isolated towards the beginning, being left out of the loop, not knowing about the Order of the Phoenix or being connected to his friends. I thought Dumbledore was so unfair towards Harry, saving him from expulsion by defending him at the trial at the Ministry of Magic and then leaving him without any explanations.

I think Dolores Umbridge is one of the people I most love to hate. She stirs up so much negative emotion that it's almost ridiculous. There's occlumency classes with Snape, there's Harry's first kiss with Cho Chang, there's so much Luna Lovegood! And of course that amazing and heart-stopping showdown between Harry and his friends and the Order against the Death Eaters. No surprises here at which point I started crying! 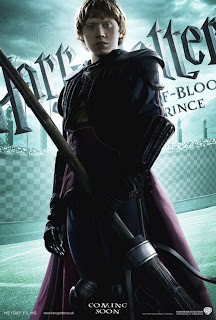 Harry Potter and the Half-Blood Prince - It's absolutely amazing to see how much of a change there is in the films from the first to these films towards the end. Everyone is so much more grown-up and it just makes me sad that after Part 2 is out, there won't be anymore! I'm bereft already. And that's what I was thinking about as I watched Half-Blood Prince. In fact, I couldn't even write notes for the last half of this film because I was just so melancholy about it all.

This one starts out with the Death Eaters terrorising London. If I've not mentioned it before, I love how these films really embrace British actors and actresses as well as shows off London and the English countryside. I love that. But back to the film - the beginning is a little up in the air with the questions it raises - with Snape performing the Unbreakable Vow and Harry and Dumbledore visiting Slughorn.

There's that great scene of Fred and George's magic shop that I wish more than anything were real so that I could go and visit! And there's Dumbledore's creepy early memories of Tom and the Draco versus Harry moments. Any scenes involving Quidditch are my FAVOURITES so I loved every single second they showed of Ron trying out and then making the team. I absolutely adored that.

And of course Ron and Hermione just break my heart! And that added attack scene on The Burrows! I did enjoy the added element of Potions into this film and the Liquid Luck thing was just great. But oh, the ending.


And that's it for me. I know I still have Harry Potter and the Deathly Hallows Part One to watch, but I think I'll wait until nearer Part 2's film release to do that, so it's all fresh in my mind. I've also re-read Deathly Hallows. I'm hoping that won't be a mistake, but I'm sure the film will do a great job of portraying the feel of the books. I cried like a BABY re-reading the book. It was only the second time I've read it, I think, and it really brought me back to how emotional I was reading it the first time. I remember having to put the book down on several different occasions because I was crying too hard to see the page. Towards the end of my first time reading it, I had to hand the book over to N so that he could check and reassure me that my favourite character didn't die in the final fight between Harry and Voldemort.

Seeing the final film is going to be a heart breaking experience. I will be utterly sad to finally be at the end of it all. *sobs*
Written by Michelle Fluttering Butterflies at 12:50