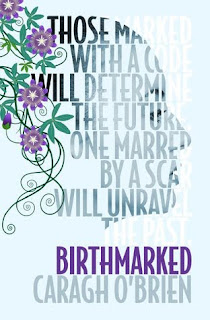 I was thrilled to hear that Birthmarked by Caragh O'Brien would be published here in the UK. The book had been on my wishlist for ages as so many US bloggers seemed to have read it and loved it. I was really looking forward to reading it and while at first I found it difficult to get into, once Birthmarked hit its stride, I found myself completely lost in the story.

Birthmarked tells the story of a future world where a small village is divided by a wall. Those within the wall appear to live happy, carefree lives with no worries. Those that live outside the wall constantly fear for survival and enough food and water.

Gaia Stone, 16, lives outside the wall and has followed in her mother's footsteps as a midwife. Law dictates that as a midwife, Gaia, must advance a certain number of babies forward to live their lives within the Wall. The huge scar from a childhood accident that is visible on her face makes Gaia shunned from the pretty, happy people who live within the wall who only value beautiful things.

But Gaia's world changes drastically when one night, both of her parents are arrested and put in prison inside the Wall. It is thought that Gaia's parents have created a code which could explain the birth defects of those inside.

Gaia does everything she can in order to save her parents, even at great risk to herself. She's quite an interesting character, Gaia. Strong and capable and not afraid to stand up for what she believes in. Her character goes through many changes throughout Birthmarked, at first believing wholeheartedly in the rules and regulations set aside for her and her family and then slowly becoming more aware of the injustices and the unfairness of one group of people living in luxury while the other lives in abject poverty. I think my favourite thing about Gaia is her relationship with Sgt. Grey. She really puts a lot of pressure and faith that other people (and by this I mean Sgt. Grey) will do the right thing. Make the difficult choices and her disappointment in Leon, even when he is a complete stranger to her was fascinating to watch.

There's quite a bit of science in this book. Lots of detailed descriptions of DNA and genetics all of which mostly didn't interest me. I was more focused on the relationships between the characters and the morality of the different concepts that were brought up. I think maybe I was hoping for a little more in that area, but I can see how that could be themes the reoccur throughout the rest of the books in the series. I found Birthmarked to be a very enjoyable read and I'm really excited to read more in this series.