Series of books I have yet to read

I have collected quite a few different series of books that I've been excited to read. However, I've noticed that most of these books stay on my shelf unread for quite some time. I thought today I might talk about some of them in the hopes that it will get me excited again to read them.

Vampire Academy series by Richelle Mead - I began collecting this series earlier this year after feeling horribly left out when there was so much excitement amongst bloggers and on Twitter for the last installment of the series, Last Sacrifice. Everyone was all in a tizzy over it and I wanted to be part of something that big and addictive. I've got the first 3 or 4 books in the series as I'm told once I finish the first book I won't want to wait to get to the next book. I hope so...

Tomorrow series by John Marsden - I've heard such wonderful things about the first book in the series, Tomorrow, When the War Began, especially after the movie was released and the book was repackaged and published again. It was an incredible find actually, a local charity shop had all of the books in the series in their book section AND they had a buy one, get one free offer on their paperbacks. So I picked up the entire series at a serious bargain. But I've still yet to read them...

Spook's Apprentice series by Joseph Delaney - This series is probably aimed at a younger audience than I normally read, but I still quite love the sound of them. I was very lucky to have won the entire series in an incredible giveaway over at Book Chick City. These books stare at me from their place on my shelves, begging to be read. It won't be long, I'm sure.

Outlander series by Diana Gabaldon - I won this entire series in another blog giveaway. Shockingly, I came the closest in guessing page numbers of all the books in the series even though the person had a strange mix of hardback/paperback/large format books. It'll probably be the last time I'm ever THAT lucky. Still, the size of the books put me off slightly as does the slightly confusing premise. But I do hear good things about the series and how much people love them. I wonder how long it will take me to get over my intimidation of chunky books? 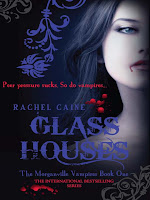 Morganville Vampires series by Rachel Caine - The Morganville vampire series is a series that I've put off FOREVER. Mostly because I thought it would be a Twilight rip-off as well as being badly written. I was wrong on both accounts, as I have read the first book in the series and really enjoyed it. I did want to read the next in the series straight away, but I think my problem was that I was afraid of reading the second book before I'd reviewed the first. It took me awhile to review Glass Houses and once I had, the momentum was gone. Also, I go through phases of distinctly despising paranormal books. But I do have most of the series, again, in a wonderful charity shop discovery! I will get back to Morganville and these characters eventually. Perhaps closer to Halloween?

Shifters series by Rachel Vincent - It was only at the beginning of this year that I'd read any book by Rachel Vincent, and it was the first in her Soul Screamers series. I absolutely ADORE that series now (I've only recently picked up the third book and am hugely excited to start reading it) so I figured if I loved one series so much then I should really pick up the books in the other series. Because I'm so unsure if I'll love them as much as Soul Screamers, I've only picked up the first 2-3 books in the series and I used a book swapping site to do that (mostly because my local library doesn't have them!). I think I'll like them, but something is still holding me back? Any fans out there ready to give me encouraging thoughts on starting this series?

And thankfully that is it! Phew. I have A LOT of reading ahead of me. Where do you reckon I should start?

Do you collect a series of books and then have second thoughts or is that just me?
Written by Michelle Fluttering Butterflies at 08:52