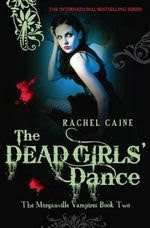 I've had most of the Morganville Vampire series unread on my shelves for awhile. I did think that this paranormal themed month would be the perfect opportunity for me to power through the series and perhaps review a bunch of the Morganville books at the same time. But for whatever reason - either I've been reading too many paranormals all at once, or perhaps it's just been too long since I read the first book in the series - I just wasn't feeling The Dead Girls' Dance by Rachel Caine.

It's the second book in the Morganville Vampires books and while I did learn a great deal more about the personal histories of both Eve and Shane, and there was lots of action and twisty-turny things that happen that were entirely unexpected, it also felt like something was lacking. I can't really pinpoint why I didn't enjoy this book as much as I thought I would.

The Dead Girls' Dance follows on directly after the events of Glass House. Claire Danvers is a 16 year old genius who is taking university classes in a vampire-infested town in Texas. Because of bullying in the dorms, she's taken up residence with some roommates off-campus. There's Michael Glass, ghost; Eve, goth; and Shane, Claire's new boyfriend. Shane's father has come to town, intent on wreaking revenge on the vampires were destroyed his family. Shane feels caught between loyalty to his father and the difficult position he finds himself in, while under the protection of Amelie, one of the founding vampires in town. Despite really shocking events happening at home and the threat of terrible things always lurking around the corner, Claire continues to go about her usual routine of school and studying. Even when school-bully, Monica, sets her up for more cruel and unusual punishment.

The Dead Girls' Dance was an interesting book that moves the story and the characters forward. I'm hoping that the rest of the books are as filled with new information, exciting action, shocking twists and steamy romantic scenes. I will definitely read the rest of the Morganville vampire books... I just might leave it a bit before picking up the third book in the series.

Have you read the Morganville Vampire series? How did you feel the second book compared to the rest of the books?
Written by Michelle Fluttering Butterflies at 08:21