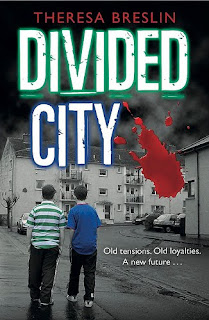 The thing that I love the best about starting this themed event is that when I began talking about my plans for this month, I recieved some of the most interesting reading recommendations from people. And for books I'd never have considered or thought of before. Books like Divided City by Theresa Breslin. Theresa Breslin is, of course, an author I recognise but not somebody whose books I've read a great deal about.

And when I heard about Divided City and the ways in which the book has helped bridge a massive gap between the people and the teenagers of Glasgow, I knew that it was the perfect book for me to read.

I can't say that I know a huge deal about the religious and cultural tensions in Glasgow. I still don't. The really basic story is that there's a split between Catholics and Protestants and that is in some way connected to which football team to support, the Rangers or Celtics. There also seems to be a negative view of asylum seekers or of racial minorities. And what is so great about this book is that in Divided City, Theresa Breslin really tries to address these huge divides in an interesting and non-judgemental fashion.

By giving a more personal perspective of these issues and also by allowing both sides of the story to give their points of view, I found it a really effective and wonderful way to spread a message of tolerance and acceptance. And it has had some really positive results in Glasgow.

The story itself is of two teenage boys, Graham and Joe, who meet at a city-wide football club for young people. They find that they got on well both on the pitch and off and would like nothing more than to hang out and be friends. When Graham witnesses a brutal stabbing in the streets of Glasgow, he'd really rather not get involved. But the man pleads with him to pass a message onto his girlfriend and soon, both Graham and Joe are involved in helping this young asylum seeker as well as identifying and questioning their held beliefs and rivalries.

Divided City was a real eye-opener for me. It is obviously centred around the troubles and problems arising from a specific situation in Glasgow, but it can certainly be applied anywhere else. Racial tension, prejudices and fears seen in this book are not restricted to Celtic and Rangers supporters! I highly recommend this book.
Written by Michelle Fluttering Butterflies at 08:26