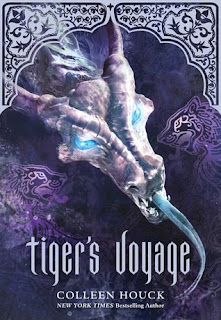 I am so in love with this series! I did my happy dance when Tiger's Voyage by Colleen Houck arrived as the previous two books, Tiger's Curse and Tiger's Quest, were so wonderful and I had such high hopes for this third book in the series that I was absolutely desperate to find out where the story would go. And Tiger's Voyage is just as exciting and addictive and heart-breaking! This series just gets better and better.

And Tiger's Voyage really has so many wonderful things going for it. I feel like India is the perfect setting as it is filled with great history and culture and the these books' exploration of different religious stories and fantasy creatures is amazing. I love how Tiger's Voyage focuses mostly on the underwater and we come face-to-face with dragons! Dragons, my heart sings!

As always, Kelsey and the two tiger princes, together with loyal Mr. Kadam must unravel the clues given by the goddess Durga in order to break this curse on Ren and Kishan put in place hundreds of years ago. The three of them begin training to dive underwater and, Kelsey in particular, steel themselves for the many hardships they will face. But of course, it's the many romantic problems that causes Kelsey the most concern. With Ren's memory of her and their relationship completely gone, she must decide if it will be better in the long term for her to wait for his memory to return or to move on and begin something with Kishan.

In the previous book, I really went back and forth about which tiger I'd like to see Kelsey end up with, but I didn't have that problem in Tiger's Voyage. For me, there's a clear winner, but I still found it interesting watching Kelsey making up her mind. There was lots of conflict and drama here, not only between the two brothers but also a third guy (!) It can be painful watching Ren and Kishan be jealous over each other, and I felt a lot of sympathy for both brothers as Kelsey does not seem to be the more self-aware character and found it really difficult to realise what it is that she wants. There's still more books to come, so I'm still hoping desperately for a happy ending for all three major characters.

What I love most about these books is the mixture of so many different things - from the romance, to the action sequences, the fantasy elements, the history and folklore that everything is drawn for, but most especially the detail of these books which really make everything stand out so brilliantly.

A fab book, one that I highly recommend!
Written by Michelle Fluttering Butterflies at 09:22