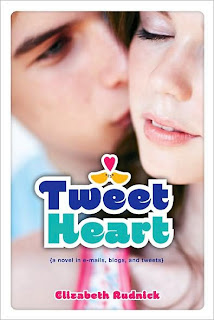 Aww, Tweet Heart by Elizabeth Rudnick is such a sweet, light and romantic read. I read through it's pages very quickly, and while it is a little bit predictable, I still had a huge smile plastered to my face throughout the entire book. There's something very comforting about reading a book like this, in which there isn't a huge surprise at who the girl ends up with in the end.

Being a huge Twitter addict, I also found the structure of the novel, as it is told through tweets, blogs and emails, to be a lot of fun. It seems very relevant to the times to be telling a love story that takes place over social networking sites like Twitter or just generally through the medium of the Internet. It's how I met my husband, I can certainly relate!

And Tweet Heart follows the romantic lives of four ordinary teenagers. There's our main character, Claire, who has this long-standing crush on the hottest, most popular guy in school. Then there's Lottie, her best friend, who seems to have a new guy around every week. There's also Claire's best guy friend, Bennett, who is a bit of a loud-mouth/geek, and his best friend Will, who has a secret crush.

Despite the majority of the story being told in tweets, it wasn't difficult at all to distinguish between the four main characters. They each had a different voice and personality and I'm super glad that there was no confusion in that respect. I found Claire's advice column and Bennett's blogs to be a nice break from all the tweeting, as well as being quite amusing.

I guess with this sort of structure to a story, it is quite difficult to gain any real character-development or depth, but I knew enough about these four characters to want to be their friends and I cared enough about them to be rooting for the characters that should be together to finally get together! I thought it was particularly interesting to see Will's character grow in confidence to finally admit how he feels to the girl he's been crushing on from afar!

It was a very fun and easy way to spend an afternoon! Tweet Heart really put the smile on my face.