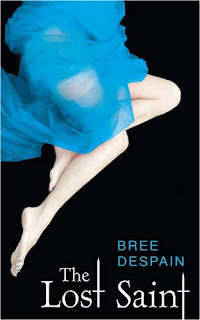 I was very pleasantly surprised last year when I read The Dark Divine, so I was very much looking forward to reading the sequel, The Lost Saint by Bree Despain. I found myself being really easily drawn into this story and into these characters... And The Lost Saint turned out to be just as good as I'd hope it would be, in fact better! This series just improves and I am dying to find out what happens next.

I have a bit of a soft spot in general for werewolf stories, but I also really loved the characters and the twisty-turny storyline, questioning the motivations of the different characters and how I just felt uncertain about what would happen next. I was a little unsure about where The Dark Divine had finished when I started this book, but as soon as I started reading, a lot of the confusion and questions disappeared.

This book follows on shortly after the events of The Dark Divine. Grace's father has left in search of finding Grace's brother, Jude. Grace and Daniel have been left trying to sort out their changing relationship as Grace has been infected with the werewolf curse and Daniel feels as though he can no longer protect himself or Grace. When Grace recieves a phone call from Jude and other strange things begin occurring, Grace feels as though she has no choice but to train as hard and as long as she can in order to become a Hound of Heaven in order to face what's coming. To do this, Grace turns to mysterious stranger, Talbot, as she delves farther into the dark world of Urbat and other demons.

I really loved the sequel. It's very action-packed as Grace and Talbot take on some truly terrifying enemies as part of Grace's new training. There's lots of fighting and blood and killing of demons, all done in the name of good, apparently. I loved finding out more about Urbat and demons and I was lapping up all the details about this new world. I felt really sorry for Daniel and Grace, as their relationship really took a hit in this book. There are so many things they have kept secret from each other, that it allowed somebody like Talbot to sneak in and threaten what they have. I really wanted to shake both Grace and Daniel, make them become more open and honest with each other, but at the same time, I loved Talbot's character. He's older and has a very dangerous and sexy vibe to him.

I also quite like that Grace is able to open up, finally, to a friend and have somebody else to talk to. Grace makes a lot of decisions and choices in The Lost Saint that as a reader I felt very uncomfortable and uncertain about, but this is not one of them. Every girl needs a best friend to be there for her. Grace really struggles within herself in this book. She wants to do right and fight evil with her new-found super powers and all, but at the same time she is at risk of losing herself to the wolf.

I was on the very edge of my seat reading this book, all the way up to the very exciting finale. Dying to read the next book now! What a great sequel and a fab series!
Written by Michelle Fluttering Butterflies at 08:51