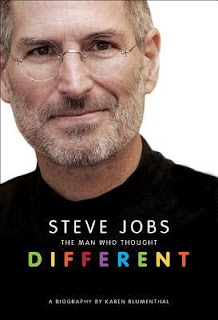 Guest review by (my husband!) N from greysqrl

Despite it being half term I woke up at 6:30 today just like every other day. Normally I'd check Facebook on my iPhone and then switch the TV to Sky News and stare blankly at it rather than getting out of bed. Today was different; for the first time in months/years there was a book on my bedside table that I actually wanted to read. As I've said before I don't tend to read many books with the only ones I care for being quirky (Douglas Coupland / Matt Beaumont) and it's been a long while since a book has really interested me. If I get bored with something I won't see it through and I do get bored very quickly. I don't get much free time but, when I do I'm surrounded by other items that want my interest, the internet, games consoles, photography and of course movies. Books don't fare very well when compared to visual competition.
I'm a software developer who works with mobile phones writing software for them. I don't own an overpriced MacBook but I do love my iPhone and iPod Nano. I've always been captivated by Steve Jobs' nemesis Bill Gates and have read many books about Bill Gates and about the invention of the personal computer but I know very little about Steve Jobs or the history of Apple so, when Michelle told me that she'd been offered a book about this iconic re-inventor for reviewing, despite thinking it to be odd considering her blog is about teen fiction I jumped at the chance to review it for her.
Karen Blumenthal's 'Steve Jobs: The Man who Thought Different' is one of many biographies about the former Apple CEO but this one is (apparently) primarily aimed at the teenage market. Although it doesn't use Fortune magazine's Jobs photo for the cover (as seen on Walter Isacsson's official biography), it does however use a relatively recent and clean photograph and the design is aesthetically pleasing. Now, most readers may not feel that such a point is valid, but remember, Steve Jobs was all about the attention to detail and the importance of the look of a product and packaging so any worthy book about Steve Jobs should take such matters into consideration if it wants to appeal to the appropriate audience. This one, like the official biography does and is in my opinion in a minority in that respect.

Unlike the official biography which consists of around 600 pages, this 300+ page book uses double spaced text and numerous (and very welcome) picture inserts, the book is split over three parts and twenty-two chapters which makes each chapter perfectly bite-sized. That appeals to me because I like to check how large a chapter is before starting it. If a chapter is just a few pages long I'll consume it and then consume the next one, and the next one whereas one large chapter consisting of the same number of pages makes me less likely to begin it and more likely to give up on the book. I should point out that the chapters are also well broken up, each has a reason to be and ends on a cliffhanger that just made me want to start the next one. So, after one sitting I quickly went through seven chapters and would happily sit and read more if it were not for the fact that I'm about to head out to the cinema with the kids. Within these first eight chapters I've learnt a lot about the young Steve Jobs, his early endeavours both positive and negative and the life experiences that helped shape him and Apple. What I've read so far has been well-written, simply delivered and the text is peppered with anecdotes from Steve and his colleagues and friends.
It is now two days since I wrote the text above and amazingly (for me) I've completed the book. This is one of only a few books that I've voluntarily completed and one of only two books that have been read in such a short time period (the other being Matt Whyman's fictional Man or Mouse). I feel somewhat saddened to have completed the book as honestly, I wanted more. The author did not appear to have personally interviewed Steve Jobs or anyone else detailed in the book and has instead compiled her work from research, despite this the book does appear to chronicle the Apple co-founder's life from birth through his turbulent time at Apple, and NeXT via Pixar and Disney to his early death.

Now, although I am interested in technology and aware of the rise of the personal computer revolution, such an understanding is in no way required to enjoy this book. Any technical information is well explained without being patronising to those who are aware and a glossary is included at the back should it be required. This allows the book to appeal to technical folk as well as those who may just wish to understand more about a guy who probably has touched your life in some way. The book is honest in its portrayal neither seeking to make a reader love or hate him; it deals well in explaining how amazing yet unpleasant Jobs could be.
So, would I recommend this book? Yes, without a shadow of a doubt. It details both the personal and public life of jobs and at times is quite sad and touching. It will briefly explain about how personal computers landed on every desktop and touches on the relationship between Job's Microsoft rival Bill Gates. It details how the company that Jobs created fired him and how he came to see this as being the best thing that happened to him. The book goes into some depth on the darker side of a man that was able to create the most beautiful products but could not accept the creation of his own child and clearly shows us how confusing, immature and petulant jobs could be whilst balancing such material well by discussing his spiritual and environmental sides.

The book in my opinion could be read not just by teenagers but by adults both technical or not. So, if this isn't the normal book you'd expect to be reviewed on this blog, consider it for someone else in your life that either has an interest in the tech-industry, loves Apple products, loves Pixar movies or even for that matter just loves to read biographies.

As Jobs re-invented existing products, this book has reignited my interest in reading.

Wonderful review, N, thank you so much!
Written by Michelle Fluttering Butterflies at 09:04