REVIEW: All These Things I've Done by Gabrielle Zevin 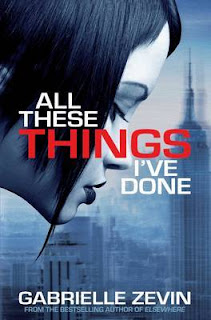 In the future, chocolate and coffee are illegal and necessities such as water are in short supply. Anya Balanchine’s life and those of her siblings have always been more complicated than that of their peers. Their late father was the head of their criminal family; trading in chocolate. Though Anya tries her best to keep herself and her siblings out of trouble, trouble comes knocking on her door anyway in the form of her loser ex-boyfriend Gable Arsley who begs her for some bars of chocolate. Worse than that is her growing feelings for the District Attorney’s son, Win, which Anya knows can only have one outcome. Suddenly, she’s being arrested for her ex-boyfriend’s poisoning, given ultimatums that resemble blackmail and put in ever-increasing danger.

All These Things I’ve Done by Gabrielle Zevin was a thoroughly gripping and entertaining book. I was wary at the outset as it has received mixed reviews; however, I enjoyed it. What I loved was that Anya was a strong, no-nonsense character whose protective and nurturing instincts for those she loves are commendable. She wasn’t wishy-washy and could make quick decisions confidently. For the most part, she was level-headed, cool and collected and thus it was great to read her refreshing story.

I loved all the secondary characters too. They were well-developed and I felt emotionally-involved with them. I liked Anya’s brother, Leo because he was a complex character. At the age of eight, he was the survivor of an assassination attempt gone wrong. Though Leo is the oldest sibling, his mental development is still that of an eight-year old’s. Therefore, Anya is in charge of the household.

I loved the romance in All These Things I’ve Done. It felt unusual (in a good way) and different from other books. I realised it was because Anya and her love interest were blunt with themselves and each other about their feelings. But though they’re upfront with each other, it doesn’t mean they can be together. Win was a very funny, charming male lead. I wished Zevin would have shown more of their relationship, rather than telling us. There were some really cute scenes, but I wanted more.

Also, Zevin should have explained why chocolate and coffee were made illegal in greater detail as they seem quite harmless in comparison to alcohol which has been made legal for everyone in Zevin’s depiction of the future. As it is something so far removed from our own society and central to the story, it needed a thorough explanation.

Furthermore, Anya was distant from the criminal underworld that her extended family glory in. Though this is out of active choice, it means that I, in turn, could not be shown some of the darker elements of the story, but only told after the event. I did not mind this in this first book; however, I would be disappointed if the same were to be said of the second book. There were a few scenes in the book which Anya should have been present in as it would have made the story much more exciting. Being told about it afterwards didn’t have the same effect.

Overall, apart from the few minor elements which could have been improved, I loved All These Things I’ve Done by Gabrielle Zevin. I was in Anya’s head throughout the entirety of the story and I sympathised with her. She is a practical and strong character who doesn’t like to cry. I can’t wait to see how she develops in the next book in the trilogy, Because It Is My Blood.

Sounds fascinating, thanks Kulsuma!
Written by Michelle Fluttering Butterflies at 08:34