REVIEW: A Certain Slant of Light by Laura Whitcomb 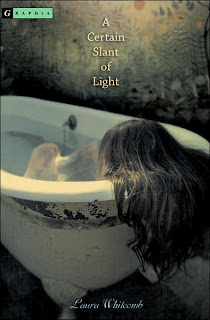 I was very excited to read A Certain Slant of Light by Laura Whitcomb as the concept was fascinating and unusual. When Helen, who hasn’t been seen by human eyes for a hundred and thirty years, sees a boy watching her in the classroom of her host, she’s jarred. Who is this boy and how can he see her when no one else can? The shocking answer is the beginning of a long and complex road to ultimately finding closure.

A Certain Slant of Light had many elements that I enjoy in a story; lovers who can’t be together, ghosts and plenty of mystery. I couldn’t wait to find out how Helen and James, the main characters, could ever be together, what they had done to remain on Earth and how they affect others.

The story kept me interested for the most part. Whitcomb’s writing style was great. The exciting part was learning the rules that limited the ghosts, for example, they had to stay close to their host. However, I felt at times that the rules weren’t explained thoroughly and that the story focused too much on their hosts’ lives rather than finding out more about their own lives and finding out why they were ghosts and hadn’t moved on.

When Helen and James take possession of others’ bodies; Billy and Jenny, I was unconcerned by it as the hosts didn’t seem to value life anymore. However, my view quickly changed when Helen and James become lovers. It was creepy, wrong and a violation of their hosts’ bodies. As well as this, I felt that their relationship moved too fast; they hardly knew anything about each other.

I also wanted to see other ghosts but this wasn’t the case. This was strange as Helen was a ghost for so long and in all those years, she hadn’t seen one. I was left with a lot of questions in the end. For example, where do the souls of the people they possess go and why isn’t the world overflowing with ghosts? What was the abstract ‘evil’ they mentioned?

As well as this, the religious aspect of the story was highly negative and vastly exaggerated. It wasn’t a realistic portrayal for me at all. Furthermore, I didn’t like the fact that Helen was an observer rather than someone who took action. She needed to be led by James.

Overall, A Certain Slant of Light had some interesting ideas and could have been a brilliant book. Although I did like how the story ended, the wild tangents and the obvious twists let it down.

Interesting. Thanks Kulsuma!
Written by Michelle Fluttering Butterflies at 08:28

Email ThisBlogThis!Share to TwitterShare to FacebookShare to Pinterest
Labels: by kulsuma, guest review, paranormals, reviews, YA