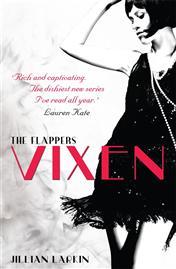 I'm actually really surprised by Vixen by Jillian Larkin.  I'm not usually such a big fan of historical novels and not knowing much about a particular historical era usually makes me less excited to read it.  I really don't much about the 20s, about prohibition, or about the flapper lifestyle.  Somehow I've managed to avoid all of that until now.  And while I had every intention of not reading Vixen, a few overwhelmingly positive reviews of this book made me more hesitant to give it a miss.  So with some reluctance, I decided to give it a try, and I really quite enjoyed myself.

I found myself really fascinated by the flappers and the jazz and by these three main characters as they navigated new lifestyle choices and new experiences.  Vixen is told by three alternating viewpoints - Gloria Carmody, rich girl who feels suffocated by how few choices now that she's become the fiancee Sebastian Grey in a type of business arrangement between their two families.  Gloria's best friend, Lorraine, who'd rather the spotlight was less on Gloria and more on her.  And Clara, the girl who has been banished to Gloria's family after making some rather dubious decisions.

While I didn't particularly connect with either of the three girls, I did love seeing this lifestyle and the society circles they are involved in from different perspectives.  Clara is haunted by her past choices and a previous relationship as she embarks on becoming somebody new and different.  Lorraine was a bit difficult to like at all, with her jealousies and her attention-seeking ways.  And it's Gloria who is perhaps the most scandalous of all.  She goes from innocent and sheltered teenage girl and throws herself into a world populated by gangsters and sexy black musicians.

I found it a bit difficult to navigate the different social restraints on these girls, as it is a time where forced marriages, propriety and separation between the upper white classes and any black people whatsoever on the one hand, and on the other, there's speakeasies on every corner in which people can unwind, listen to jazz and drink alcohol.  I found these social lines to be really interesting and I found myself intrigued by the ways in which these characters tread that line.  I'll be very interested to read the next book in this series and I'm curious enough to look into this time period even more!
Written by Michelle Fluttering Butterflies at 08:42