I'm so happy to have Rebecca from Rebecca-Books here today talking about awesome women and role models! I've been meaning to reboot my Awesome Women feature for awhile and I'm thrilled that today it is Rebecca sharing her thoughts today!  Please, please do go follow her blog and on Twitter, she is absolutely lovely!

To find out more about Rebecca, please do visit the following websites... 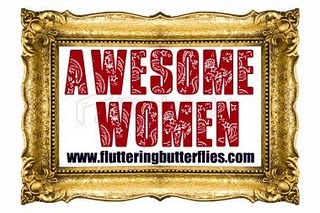 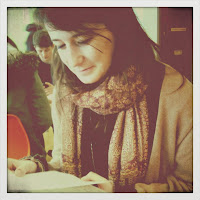 Well, for starters, I’m Rebecca, aged 17, and living in the lovely, rainy London, England. At the tender age of 15, I started a book blog named Rebecca-Books where I reviewed all the books I read (which were, and are still, pretty constant) as well as sharing my love of books with other people who, well, also loved books.

When I’m not blogging or reading, I work part-time at my local bookshop or I’m at college. I’m currently about to start my second year at college studying English Literature, Media Studies and History. I’m going to university next year (the idea absolutely terrifies me) and hopefully will go into the publishing business when I’m older *crosses fingers*


I’m not sure I had a constant role model really, the most constant was probably Barbie (sad but true...).

Most of the people I looked up to went through phases. I had a Busted stage, Girls Aloud, Steps, S Club 7, Blue Peter – all the good-old British childish influences.


I don’t think I have one person that I can say ‘That is my role model’. I have people I look up to for different reasons or that I like a certain aspect of them. 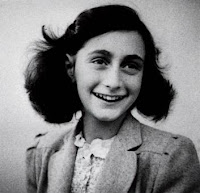 Of those, I have quite a few, if I’m honest. I think the main one is Anne Frank. Since I learned of her ‘story’ as such, through the BBC adaptation of her diary a few years ago with Ellie Kendrick, I loved the idea of Anne Frank and felt so sad over what happened in her short life. I mean she died, weeks before her concentration camp was liberated and I always think the ‘what if?’ question whenever I’m reminded of that. I also loved how she was so passionate about writing and passionate about what she wanted to do, even if she was stuck in an attic with people she didn’t particularly like. I would say Anne Frank is probably my main role model, with others mixed in similarly such as Jane Austen, Elizabeth I, Lady Jane Grey... (see the theme of historical figures here).


Ah, I wanted to be so many things. But first and foremost, I wanted to be a trolley dolly, as they put it in England – a stewardess, flight attendant, whatever they call it these days. Not entirely sure why I had this dream job but thankfully, I grew out of that stage. The next career path was being an actress which sparked up in about Year 7 (6th grade) when we got timetabled for a whole proper Drama lesson! I started at a drama school and did Drama for GCSE, LAMDA, everything. It was only really a few years ago I fell ‘out of love’ with Drama especially after I was slated on my performances by my Drama teacher perpetually. I wasn’t as good as I needed to be and wouldn’t have made it to the West End. At all.


The main influence I would say is my grandmother. She is in her 80’s, doesn’t take any medication (all to her friend’s disgust) and acts like she’s still in her 30’s. I love her dearly and it is my one hope that she is still around on my wedding day because I think she would love it more than her own or my parents’ one. She is also so supportive of me and more of a best friend rather than a relation.

Apart from my mother, I would say the only other influence is my old English teacher. My class and I, the top set, entered GCSE English with no idea how to string a decent essay together, also with no confidence in English at all – especially with most of our past teachers being, well, rubbish. Throughout our two years with her, we all learnt so much, both on a teaching and personal level. I actually think she would do anything to help us get where we wanted to be. She praised us and told us off at times but she was never boring. I got two A*’s in English Language and Literature and I don’t think I would have got those with the notoriously bad other top set teacher. It was her really that sparked up the blog. I remember her saying to me when I was confused about the meaning of a poem, ‘If you have a love for something, like she does in this poem, just go for it. Even if you think it’s unattainable. Just do it because you love it.’

Is there a fictional character that reminds you of you?

I re-read ‘The Truth About Forever’ by Sarah Dessen recently and I think the protagonist in that, Macy, is a lot like me. I don’t know how to talk to people sometimes and I always hold myself back from doing new things because I’m scared or I think someone wouldn’t approve – much like Macy. I think I need a bit more of her courage sometimes.

I’ve been told that the main character in Kathleen Tessaro’s ‘Elegance’ is a lot like me. They’re words, not mine. I think it’s because I have piano fingers – although I’m useless at playing the piano.

I read a review of The Perks of Being a Wallflower by Stephen Chbosky where they (can’t remember who!) said that they wanted to give this to their 12 year-old goddaughter saying ‘Read this. You will need it.’.

After reading it myself, I totally understand that and I wish someone had given me this when I hit 13 with an inscription such as ‘So, teenage years may not turn out like Charlie’s. But look how they deal with the problems’. When I’m the crazy aunt/godmother to someone, this is their 13th birthday present – every teenager should read this (or watch the movie, I guess now...)


At 17, my adolescence is nearly over really. If I could meet my 12-going-on-13 self, I would advise them to take every chance they have despite what people may think. Oh, and, don’t tuck your shirt in your skirt like in primary school, especially on P.E days. Or go out with your best friend for 2 years – not worth it at all.

Also, I know you will want to read under the table in form time to get away from the boring conversation around you. Just go for it! They’re much more interested in books than you think.

Wow, erm, I think if I did have a bookish girly sleepover, it would be a very large one. For starters, probably all the protagonists from Sarah Dessen’s books – especially Macy (The Truth About Forever) and Annabel (Just Listen). Audrey and Victoria from Audrey, Wait! (Robin Benway). Hazel from The Fault in Our Stars (John Green). Throw perhaps Theodore Boone in there (John Grisham), although I have a feeling he would decline the invitation to spend the evening with a load of teenage girls...


Ooo...I think I like seeing how women have become the heroines really of children’s/teenage fiction now. Gone are the boy protagonists. Now girls can take centre stage or at least be a main part of the boy’s life e.g. Harry Potter.

Another thing I like reading about is on teenage issues – how girls, and guys, are represented both in literature and overall, in the media. It’s something that annoys me, being a teenager myself and I find the most interesting and am the most passionate about.

Also, I’m a fan of big dystopians so I find it so interesting to read interpretations of what life could be like in the future such as love in Delirium by Lauren Oliver, body image like in Uglies by Scott Westerfeld, pregnancy like in Bumped by Megan McCafferty or curing old age like in The Declaration by Gemma Malley. I like the feeling of inevitability – these are sometimes shockingly similar and it’s good to be a tad prepared at least.

Thank you so much for this interview, Clover! This is such a lovely idea that really got me thinking about the women and role models in my life. Such a nice idea.
Written by Michelle Fluttering Butterflies at 09:08