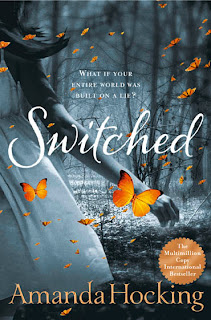 Switched is the first book in the Trylle Trilogy from self-publishing ‘sensation’ Amanda Hocking. Hocking sold millions of ebooks before securing a publishing deal, and the paperback is the version I read. While I think what she has achieved is amazing, I also think she’s a good example of why traditional publishing, and
especially a good editor, are still valuable. I don’t know how much has been changed from her original version and the one in book form, but I would guess not much, and this hurts it. While there’s a reasonably enjoyable book here, it needs a lot of work to make it truly good.

Wendy Everly has never felt like she really fits in. When she was six years old her mother tried to kill her, claiming Wendy wasn’t her daughter, and she’s been in an institution since. Wendy was raised by her aunt Maggie and older brother Matt in a loving home, but she didn’t feel like she belonged. Then a mysterious boy appears at her new school and tells her she is different; in fact, she’s a troll. She has the ability of persuasion and so can make people do what she wants them to, and she’s a changeling – she was switched at birth, meaning the woman she believed was her mother was right all along. Wendy follows Finn back to Forening, where the trolls (Trylle) live, and meets her real mother, as well as unexpected duties.

As I said, I found this to be fairly enjoyable. It is a quick and easy read, fast-paced and Wendy is a likable character. If you’re looking for something to just pass the time then this may be a perfect fit. But there’s also a lot that works against it, including that fast pace, since it seems to rush through so many things when it should take its time a little more.

And I did have problems with the writing. It is very ‘tell not show’. As an example:

“Telling Maggie about the dance may have been the worst idea I’ve ever had, and my life is made up almost entirely of bad ideas. I hadn’t wanted to go, but as soon as she’d heard about it, she decided it would be the most fantastic thing ever. I’d never gone to a dance before, but she was so excited about it, I let her have this small victory.”

Couldn’t we have had this conversation fleshed out, so we could have been a part of it? We could have seen how excited Maggie was, rather than just been told. It’s very difficult to get a feel for other characters when things are written in this way. Given that the book is told from Wendy’s point of view we have limited access to other people’s thoughts and feelings. Conversations give us this access, so when they’re described as above we’re short changed. There’s too much of this in the book, and after a while it becomes frustrating.

Then there’s the world building aspect. We’re given trolls as the supernatural being of a story. These are something I haven’t really come across, aside from in fairy tales, so I’d expect a rich history and back story. Instead we’re given a world that is basically ours with some minor tweaks and a people with a bit of magic who aren’t that dissimilar to you and me. Their main traits seem to be having unruly hair, liking to be barefoot and being picky eaters. Also they have anger issues, but this mainly comes across as being bratty. Even the changeling aspect of it is under written, the reason is sort of pointless and very human-like: financial gain. Where’s the mystery? Where’s the magic? It seemed like Hocking wanted to use paranormal aspects but keep the characters pretty. That’s fine, but also extremely dull.

As with all books of this genre there is a romance, and a romance with obstacles. Finn is the love in question, and he’s very dreamy (sorry, ‘foxy’ in this world, and boy did that description drive me mad) and protective but that’s about all you get from him. Part of the problem with believability is how Wendy acts around Finn. It seems she is willing to follow him back to Forening merely because he is hot and lurks around on her window ledge (don’t they always?). She doesn’t ask any questions about where she’s going, and even when she gets there and everyone is expecting her to act in a certain way, she still doesn’t ask questions. At one point Finn says to her ‘Do you realize what you’re giving up?’ No! Because you haven’t told her!

In the end I found the writing too frustrating to truly enjoy the book. I think it’s a shame, because there is enough here to make a decent story, it’s just not executed well. The whole thing feels incredibly rushed, and like a first draft that’s been thrown out there with no revision. It speeds along and everything happens very easily, even the ending feels rushed and wrapped up in a couple of pages, while of course setting the scene for the next book. I won’t be reading the next one based on this, I’m just not intrigued enough. But then what do I know? The woman has sold millions, she must be doing something right.

I find your review incredibly interesting! Thank you Carrie
Written by Michelle Fluttering Butterflies at 08:55