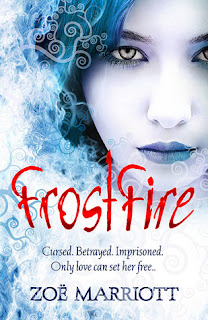 Last year I went on holiday and took with me Shadows on the Moon by Zoe Marriott and it was incredible, one of my favourite books of the year.  And now Zoe has done it again.  This year on holiday, I took with me FrostFire and ended up crying several times into my hotel pillow late at night.  I remember once not wanting to leave to go sightseeing because I had just 50 pages left.

I was slightly worried about taking FrostFire with me, as it is a sort of sequel to Daughter of the Flame, which I own and haven't yet read.  But they appear to be more companion novels, because while some of the events that occur in Daughter of the Flame will be slightly spoilt after reading FrostFire, it won't have ruined it entirely for me.  And I'm still desperate to read those last few books from Zoe Marriott's backlist.  Zoe Marriott really knows how to create an amazing world filled with characters and situations that I care about deeply.  Her writing is quite gorgeous and moving and I will always be excited to read more of her stories.

And right from the prologue of FrostFire, and I was hooked. What is this story about a girl possessed by a wolf demon?  I wanted to know more instantly.  And things aren't looking great for our main character, Frost, as this demon inside her comes out in a rage at the sight of her own blood. This rage that overtakes Frost has led to some terrible things.  Frost has been put through some terrible things, her mother seems to barely tolerate her existence, there is no love or comfort in Frost's life - only beatings from her mother, the taunts of other people, always the risk of imprisonment and death if her curse is ever found out.  But on a mission to find help against the wolf inside her, Frost stumbles on a Hill Guard whose job it is to fight against rebel warriors.  Frost is persuaded to join and there she meets two very different men - Luca, a golden boy with a great sense honour and justice, and the troubled Arian, his best friend.

FrostFire really has everything - there's lots of action and kick-ass axe-wielding which made me cheer.  There's a wonderfully sweet romance, but also some great friendship building between a cast of characters that have very similar stories of abandonment and heavy guilt. I love that Arian and Frost in particular are very broken and have been through such difficult things.  There is a great deal of suffering in this novel, but still, they are all able to find a place to belong and the love of those around them give them the confidence to be more.

This is true for Frost more than anyone.  I love her transformation from the beginning of the novel to the end.  Her confidence in herself and her abilities grows and grows as she finds love and acceptance from this band of hill guards.  With the strength of that behind her, Frost is really a character to behold.  And this book is one to be savoured.  I really recommend it!
Written by Michelle Fluttering Butterflies at 09:41