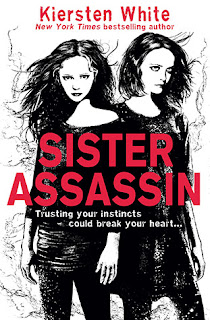 Ooh, I was really pleasantly surprised by how much I enjoyed Sister Assassin by Kiersten White.  When I first heard of this book about twins, where one is sent off to kill someone and the other is a blind psychic, I immediately thought that this could definitely be a lot of fun.  What surprised me is how emotionally involved I got while reading it and how much I loved the different relationships in the book.

So there are these two girls, Fia and Annie. And as Sister Assassin begins, Fia is on an assignment.  Her mission? To murder this unknown-to-her guy.  But Fia has this shift in her conscience just before it happens and instead of killing him, she compromises herself and the safety of her sister, Annie.  By saving this boy, she sets off this chain of events that will mean that everything in her and her sister's lives change forever.

And while I loved the exciting and dangerous opening to this book, once Fia changes course and has more time to reflect on what not killing someone means for her, I found myself enjoying it far more.  Fia and Annie are mostly orphans, who were shipped off years ago to this weird and secretive academy that Fia always knew felt a bit off.  But it was the promise of a better future and education for Annie, who is blind, that meant that both girls stuck together and went along with whatever the academy wanted for them.

But this weird academy is for gifted girls - those, like Annie, who can see the future or can read minds or sense the feelings of others.  And Fia doesn't have any of these gifts.  She instead is trained to become an assassin.  And despite Fia's misgivings about the morality of the jobs she's being trained for, there is always this threat hanging over Fia's head that if she doesn't go along with things that Annie could be harmed.  There's a very strong bond between Fia and Annie and you can tell that both girls feel responsible for the other and do a lot of things to protect one another.  They have a great and complicated sisterly relationship.

The entire span of action in Sister Assassin takes place over just a few days, but there are quite a few breaks in the narrative where we get flashbacks of events that happen throughout both girls' lives at the Academy that explain some of the backstory, introduces characters and really builds on the story.  I found them to be really fascinating and it really helped me to see how and why Fia and Annie end up making the decisions that they do.

Fia's character is definitely my favourite.  She's a bit feisty and kick-ass but there's such vulnerability about her as well as she's been dealing with such pressure and guilt and unhappiness for such a long time.  I especially loved the way in which Fia interacts with both Adam, the boy who she rescues, and also James, the boss's son.  I really can't wait to see more of these relationships in the rest of the series.

Sister Assassin is a wonderful read, with great characters, emotion and action!
Written by Michelle Fluttering Butterflies at 08:32