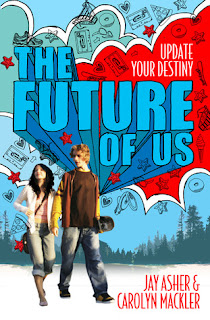 I recently read a wonderful book, The Future of Us by Jay Asher and Carolyn Mackler.  It has a great premise - two teenagers for the 90s try installing AOL on their home computer and are transported 15 years into the future and log onto their Facebook accounts.  Looking at the strange (and changing!) status updates, relationship status, photos and friends lists, the two characters make some rather startling conclusions about what they really want for their futures and what will make them happy.

It was a really fun read and I think the thing I loved the most about the book is that rush of nostalgia that I felt when reading about Josh and Emma's lives in the 90s.  In 1996, I was 14, just a bit younger than the two main characters and a lot of their experiences felt very similar to mine.  I remember installing an AOL CD onto my computer and tying up the phone lines and it was just really nice to be reminded of my teen years in such a fun way.

The thing that got to me the most though were the references to music throughout.  Emma in particular mentions the Dave Matthews Band a lot.  And while I wasn't that into them when I was 14 in 1996, I remember hearing a lot about them.  Other bands mentioned were Hootie and the Blowfish and Green Day and they both bring back very strong memories.

So I thought it might be fun today to see which songs and bands I would have chosen for my 1996 music time capsule.  There are songs that I remember very well that I haven't included because they aren't good memories (Unbreak My Heart by Toni Braxton, Because You Loved Me by Celine Dion) Feel free to think of that what you will and also feel free to include your own music memories or songs in comments...

Only Wanna Be With You by Hootie and the Blowfish

It was only while reading The Future of Us that made me realise how much I really did like Hootie and the Blowfish during the 90s! There's one song in particular, Let Her Cry, which I know has some significant meaning to me, I just can't remember how or why!  I just think that Hootie was just always there, singing the background music to my teen years.

Just A Girl by No Doubt

Holy crap, what a great blast from the past this song is.  No Doubt were definitely one of the major voices of my teenage years.  And Gwen Stefani was one of my fashion icons as well.

I'm kind of cheating on this one.  I saw this song on one of the 'best of 1996' lists that I was looking at to jog my memory and had to include it.  I think there are only two songs by Oasis that I'd ever heard before moving to the UK and those two songs were Wonderwall and Champagne Supernova.   And while I'd heard both songs many times, it wasn't 1996 that I have memories of either song.  It was two years later in 1998 when I was turning 16 and singing along with some strangers in a bus on our way to doing some manual labour in the desert...

Who Will Save Your Soul by Jewel

While I do prefer Jewel's later music, it was Who Will Save Your Soul that attracted me to her songs.  I really liked the folksy feel of it.  Even now, many years on from 1996 and I still prefer a female voice singing a folksy song similar to this.  I have very strong memories of being in my room, wailing along to this song.

Aww. Alanis is such a huge part of the 90s for me.  I remember going to a dance at the end of 8th grade and I was in a circle of friends and we were dancing in a group and this song came on and all of us got that much more excited and started singing along too.  Still makes me smile.

Diggin' On You by TLC

TLC were one of those bands that I was crazy about in the 90s.  Waterfall, No Scrubs and Unpretty being particular favourites.  I remember watching the Diggin' On You video when it was released and seeing along to it when I was listened to the weekly music charts :)

One Sweet Day by Mariah Carey and Boyz II Men

I didn't have to include this song, but I did.  Because I was the biggest Boyz II Men fan ever.  And this cheesy, cheesy song was one of my favourites. No judgement!


What songs spring to mind for you when you think of 1996?
Written by Michelle Fluttering Butterflies at 08:04